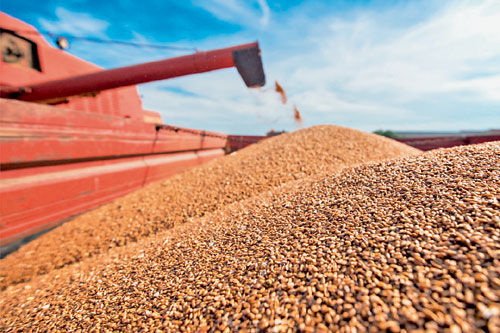 – Due to hot weather this year wheat production in the country is expected to decrease by 9.5 million tonnes.

Trends in the grain market in the country have seen a rapid reversal. Years ago, the production of wheat was less against the domestic demand and at that time wheat had to be imported into the country. However, after the start of the green revolution, there was an abundant production of wheat and then a situation arose that instead of importing wheat, we ended up exporting wheat. Meanwhile, this year has seen the global grain market equations change significantly due to the war between Russia and Ukraine. Due to the Russia-Ukraine war, the supply of wheat from these countries to the world market was disrupted, and the global price of wheat rose rapidly. As the prices in the world market increased, many wheat importing countries looked to India for wheat supply. During this period, as the export of wheat from India increased rapidly, the government became concerned to maintain sufficient supply of wheat in the country and due to this, the government imposed restrictions on the export of wheat. The global boom in wheat was supported by buoyant exports from India. Recently, Russia and Ukraine started talks to send wheat supply to the world with mutual agreement. However, as Russia’s attacks continue in the meantime, there have been recent indications that such talks have not progressed.

Meanwhile, domestic wheat prices have been seen rising again recently despite restrictions on wheat exports from India. Informants said that the demand in the wheat market in the country has increased significantly. Widespread pre-monsoon heatwave in the country also affected wheat crop production and its impact is now visible in the market. In addition to curbs on wheat exports from India, the possibility of increasing wheat exports from the country in the form of government-to-government agreements is dim given the current domestic supply situation. According to Madhya-Pradesh market sources, farmers who grow wheat have sold most of the quantity and now the income of wheat in the markets is less than expected. Prices have gone up After the government imposed restrictions on wheat exports in mid-May, the market prices of wheat fell, and counting from that price, the market prices of wheat have increased by 11 to 12 percent so far, market insiders said. According to Madhya Pradesh market sources, prices have increased to around Rs.2350 to Rs.2360 per kilo. This year, the new crop of wheat in the country has come less than expected. The government had earlier presented the wheat crop estimate of 1060 to 1065 lakh tonnes, but according to market informants, the wheat crop is likely to come at a maximum of 950 lakh tonnes. The US Department of Agriculture has estimated India’s wheat crop at 9.9 million tonnes. In the previous year of 2021, wheat crop was produced around 1095 to 1096 lakh tons in India. India ranks second in wheat production in the world, but this year, trends have been reversed in wheat production in the country. This year, the country experienced intense heat, especially in the months of March and April, and its effect was seen to be adverse on the wheat crop and yield. As the supply of wheat has decreased, the purchase of wheat by the government has also seen a significant decrease this year. Compared to the amount of wheat the government bought in 2021, the government’s purchase this year has reduced by more than half. The Indian government is likely to export some wheat to Sri Lanka and Nepal. Apart from this, the possibility of special export of wheat from the country is now less. The export of wheat from the country this year has been around 35 lakh tons, which was only around 11 lakh tons last year.