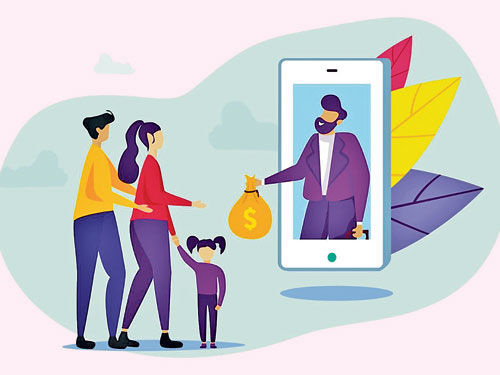 – Eat water bit by bit, pay the bill in installments… Personal loan on kettle even for quarter cutting of five rupees

The Reserve Bank’s announcement that rising loan installments will curb inflation made all the loan holders whose chests were bent by paying the loan installments swell 56 inches with pride. All proposed to the government that we should be given more and more loan facilities so that we can contribute more to the effort to bring down inflation by taking more and more loans and repaying them in progressively increasing installments.

Immediately all banks and financial institutions were told to relax the rules for loans and explore new types of personal and consumer loans.

The loan executives felt like ‘you and Vaid said’. The ‘Do Not Disturb’ provision for call centers over loan offers was scrapped. However, now people started waiting for the loan call instead of getting tired of such calls.

Many banks even arranged their executives with grocery stores, which started offering personal loans to those who came to buy 100 grams of sugar. Some youths even reached the panipuri lorry and started giving offers like ‘Batke batke pani puri khao ne hapte hapte tuh bill bhoro’. Some financial institutions put the managers of the tea kettles in the double duty of loan executives and take personal loans even on half and half quarter cutting and started giving all such tempting and attractive offers to contribute to the purpose of reducing the price of tea-sugar-milk-gas in the future.

After scolding the tea taken on such loans, someone came up with the idea that we all contribute to the efforts to reduce inflation by taking such mini mini micro loans and then paying their mega installments, but the people who do not take loans have no contribution in reducing inflation?

The borrowers welcomed the announcement with enthusiasm, but also demanded that if the defaulters get punished, the borrowers should also be rewarded. Organize a ceremony to honor the largest loan holder. The government also accepted this demand. After the statistics, it came to know that the biggest borrower in the country is the government itself, which also takes loans to pay the salaries of the employees. In this way, real estate itself makes the biggest contribution to reducing inflation. For this public service the government itself awarded itself as the largest loan holder in the country and named it, R Dala Tarwadi Award! The new news is that the government is going to decentralize this Dala Tarwadi award and announce the ‘Ghar Ghar Dala Tarwadi’ scheme and make people self-reliant in deciding the number and amount and eligibility of loans!

New proverb: increase the installment debt and drink the ghee of Songhwari!