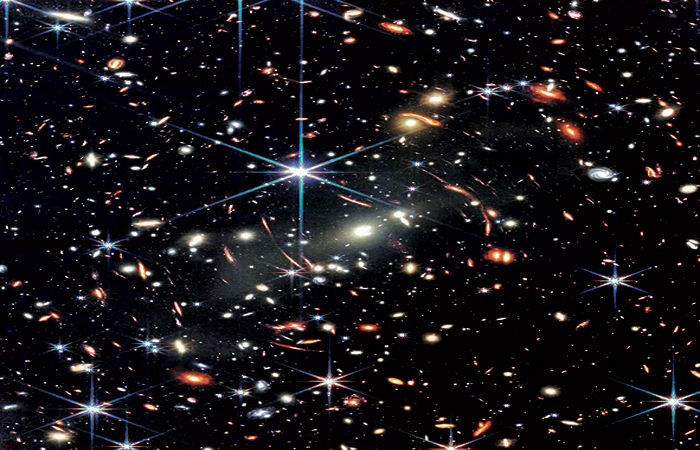 – Ocean image of galaxies bearing the name Smax-0723: found 600 million years after the birth of space

Mumbai: The wonderful and unimaginable mystery of the infinite, vast and invisible universe has been solved for the first time. A pleasing and wonderful image of space childhood has been found.

The state-of-the-art and ૧૦ 10 billion James Webb Space Telescope from the National Aeronautics and Space Administration (NASA), the US space agency, provides the most beautiful and colorful image of space in childhood, 12.5 billion years ago. Sent to earth.

This is the first image in the history of space exploration of the farthest reaches of the universe and the early stages of its birth.

This is an image of an ocean of galaxies with the symbol Smax03. This means that the image contains numerous galaxies at once. A galaxy contains a very large mass of 100 to 200 stars.

This farthest and most memorable image of the universe was unveiled by US President Joe Biden at a ceremony at the White House on July 11, 2008.

Other astronomers, including current NASA administrator Bill Nelson, were also present on the occasion.

NASA sources said that this magnificent image of a very large group of galaxies bearing the name Smax-07 has been captured by a state-of-the-art near-infrared camera in NASA’s James Webb Space Telescope. The camera’s capability is to penetrate the dense clouds of hydrogen in space and capture images of distant spacecraft.

This camera from the James Web Space Telescope has been able to keep an eye on the Smax-07 galaxy clusters for 12.5 hours straight, making its image very clean, colorful and beautiful.

World renowned astronomer and president of The Indian Planetary Society, Dr. J. J. In an exclusive telephonic interview, Rawal told Gujarat Samachar that the image of this ocean of galaxies with the symbol Smax-08 dates back to the childhood of the universe, i.e. 12.5 billion years ago. Simply put, this image is 400 million years after space was born 12.5 billion years ago.

In addition, the light emitted from this ocean of galaxies with the name Smax-08 dates back to 2.5 billion years ago.

In other words, at that stage our sun was born naturally.

The important point is that based on this research, the force in galaxies, metal, light and its area and its gravitational force can be researched. We will understand the universe better and more accurately. It is also important to note that the James Webb Space Telescope’s capabilities are amazing and sophisticated.