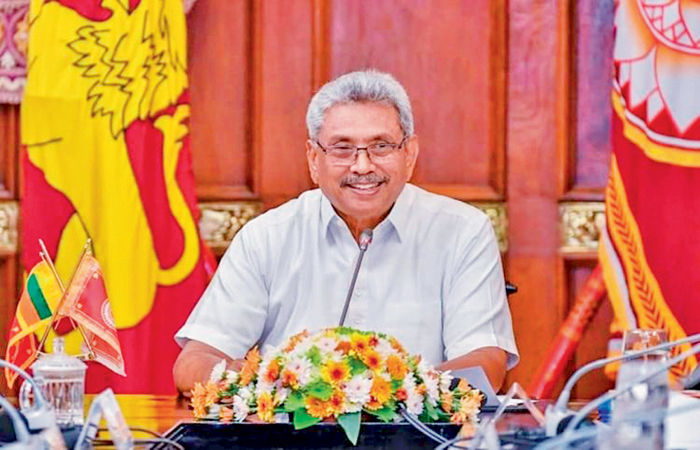 The extent to which the situation in Lanka will be explosive can be gauged from the fact that the fire brigade of the Colombo Municipal Corporation did not go to put out the fire at the Prime Minister’s house. There are crowds of people on the road. Whatever government machinery is seen, it is called Bhukka, so if the fire brigade survives, they will stay in the office, understanding millions of rupees.

People in Sri Lanka have been protesting for the last several months against the politicians who have ruined the country. The protest was largely non-violent. There was sporadic violence but people were protesting peacefully but there was a sudden explosion on Saturday.

Due to the corrupt rule of the Sri Lankan government, people are not only getting the basic necessities like petrol and diesel but also food, so there is a state of starvation. The enraged mob surrounded the President’s residence and stormed the house, harassing Army and police personnel.

President Gotabhaya Rajapaksa had sensed the agitation of the people so he fled the house while the people were struggling with the army-police to break into his official residence and went into hiding at the Army headquarters. Sitting at the headquarters, Gotbaya announced his resignation on July 17.

Mahinda took refuge in Naval Base and had to resign from there. Ranil Wickremesinghe became the Prime Minister on May 19 after Mahinda’s resignation, but his resignation on Saturday after a two-month hiatus sparked public anger at the Rajapaksa family.

What people saw after occupying the Rashtrapati Bhavan will further inflame the anger of the people. While the people of Lanka are in dire need of pies and are living like beggars, crores of rupees have been recovered from Gotbayan’s house. Some of the videos of Noto rocking the house vaults have gone viral. One video shows fifty people sitting and counting notes.

Sri Lanka’s Chief of Defense Staff (CDS) General Shavendra Silva has appealed to the people to support the army and normalize the situation, but given the current situation, people’s anger is unlikely to subside. Things like petrol-diesel have become popular in Lanka but people are hungry for food. Things like milk, eggs and rice are not available.

Even if these items are available at such a high price, it is surprising that the outrage of the people does not escalate when they see that the President of the country is sitting on billions of rupees while the common man cannot afford them. Ranil Wickremesinghe, who became the Prime Minister just two months ago, also became a victim of people’s aggression. People set fire to Wickremesinghe’s own house in Colombo.

The extent of the situation in Lanka can be gauged from the fact that the fire brigade of the Colombo Municipal Corporation received a report within minutes that Wickremesinghe’s house had been set on fire. The fire brigade could not go to put out the fire even though the house was located two kilometers away from the house. There are crowds of people on the road. The government fire brigade did not even go to the Prime Minister’s house. If he survives, he will stay in the office understanding millions of rupees.

When the Rajapaksa family was at the center of power, he filled his house instead of doing good to the people of Sri Lanka. Mahinda Rajapaksa had four family ministers in the government while Gotbaya was the President, so 80 per cent of the Sri Lankan budget was used at the discretion of the five. Taking advantage of this, the Rajapaksa family is accused of illegally embezzling ૫ 2.31 billion or Rs 9,000 crore and depositing it in foreign banks. Ajit Niwarad Cabral, a close ally of Mahinda Rajapaksa, was the Governor of the Central Bank of Sri Lanka. With his help the whole game was played and Lanka was ruined.

The current situation in Lanka does not exist without the help of the International Monetary Fund (IMF). The IMF has shown a willingness to help, but it is necessary to end the violence and establish political stability. Seeing the aggression of the people, people are not going to go home on their own, so now the only option left is for the army to come to the field and force people to stay in their homes by using force to control the situation.

It is necessary to establish political stability while the army is in control of the situation. Gotabaya Rajapaksa has not yet resigned but if he does, the Lankan parliament will appoint an MP as president. A new appointment must be made within a month of Gotbaya’s resignation. It is also necessary to convene a sitting of Parliament in three days.

Seeing that Gotbaya has escaped by burning the burning house to Krishna, so seeing that no one is ready to become the president now, it becomes possible to work by making him the acting president. He also has no choice but to step down as Prime Minister Ranil Wickremesinghe, so it is possible that Wickremesinghe will be acting president for a month and then form a national government. It is also possible that one of the cabinet ministers will be appointed to the office of the president and work without a government until the parliament elects a new president.

It is unknown at this time what he will do after leaving the post.

If there is peace, the IMF is ready to help

The International Monetary Fund (IMF) has shown readiness to provide all kinds of assistance in Lanka. The IMF has officially said that if the political turmoil in Sri Lanka is resolved and the violent protests subside, negotiations for an economic package for Sri Lanka will be allowed to resume.

The IMF offers a package to help all the countries in the world get out of trouble. For this, conditions have to be complied with, including stopping subsidies, reducing costs, and adopting a policy of economic liberalization. India too emerged from the economic crisis in the 1990s with the help of the IMF. Pakistan is currently trying to re-emerge with the help of the IMF.