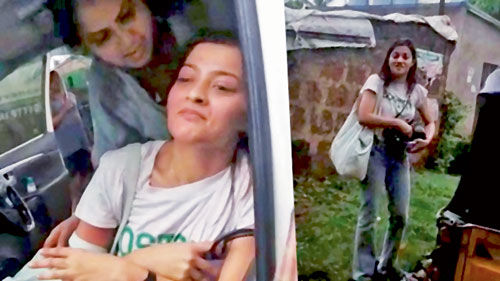 – Hero Babushan’s defense that his wife is from a non-film background and Prakriti is only a childhood friend and classmate: Police complaint face-to-face

In an unfortunate incident that happened to National Award winning Odia actress Prakriti Mishra, her co-star Babushan Mohanty’s wife Tripti publicly beat her up on the road in Bhuveshwar. Suspecting that Prakriti and her husband were having an affair, Tripti attacked with the help of some goons.

According to the viral video of the entire incident and details of the police complaint, both Prakriti and Babushan were going together in a car at the Bhubaneswar airport when Tripti stopped them and beat Prakriti.

Tripti suspected that her husband was having an affair for a long time. Hence he arranged a watch near the airport along with some gangsters. Tripti’s father was also with him at this time. As soon as Prakriti and Babushan were seen together in a car, it overturned and crashed on them. In the video, Tripti is seen pulling Prakriti’s hair and threatening her by saying that she has ruined my house. Prakriti got out of the car shouting help help and ran to sit in a nearby auto rickshaw. Tripti has also received the National Award for the film Hello Arsi.

Both Babushan and Prakriti have recently worked together in a film named Premam. According to the defense of both, there is no affair between them and they are just colleagues. According to Babushan, his wife Tripti, being from a non-film background, does not understand certain things and believes the gossips to be true. Prakriti is his childhood friend and colleague. He and Prakriti were to take a flight together to Chennai so he picked up Prakriti from her home and both were going to the airport together. That’s when Tripti saw them together and got a misunderstanding.

Prakriti’s mother filed a complaint at the nearest police station regarding the incident. According to nature, satisfaction has lost its mental balance. Tripti also reached the police along with the family and filed a counter complaint.

In a TV interview and social media post, Prakriti alleged that Tripti’s father misbehaved with her. He said that he is being wrongly implicated in Babushan’s domestic dispute.