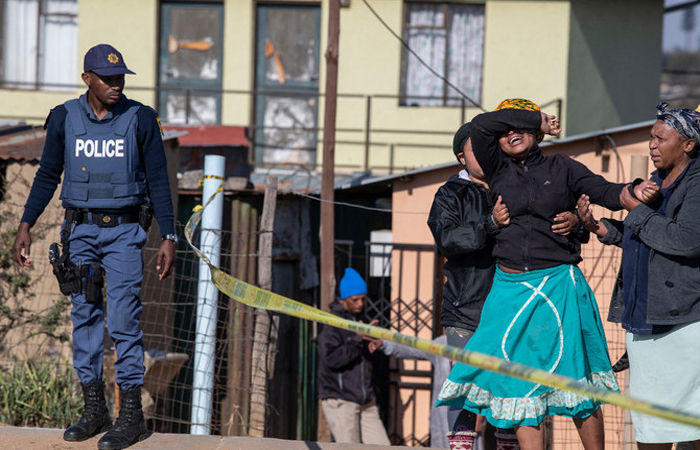 – Like America. Sensation from the mass shooting incident at a bar in Africa

– 15 killed in attack in Soweto, 4 killed in mass shooting in Sweetwater: attackers flee in both incidents

JOHANNESBURG: At least 18 people have been killed and 10 others injured in a midnight mass shooting at a bar in South Africa’s Soveto, three of them in critical condition. The assailants broke into a bar in Johannesburg’s Soweto and fired indiscriminate shots. The assailants then fled in a white minibus taxi. Police have not yet made any arrests in the incident. Mass shootings in South Africa, like in the US, are now rife.

Police said people were dancing to the music and having fun at the bar after midnight on Saturday. At the time, the attackers in a minibus taxi opened fire. Thirteen people died on the spot and three others were pronounced dead on arrival at the hospital. Police are investigating the incident. The injured have been admitted to Chris Honey Baragwanath Hospital. According to police, most of the victims were between the ages of 18 and 5.

Lef, the police commissioner of Guatemang province. People. Elias Mavela said police found a number of empty cartridges at the scene. According to a preliminary investigation, people were having fun in the licensed bar during official hours. Suddenly, the sound of gunfire sent shockwaves through the crowd. We do not yet know the purpose of the attack or why these people were targeted.

Mavela said high-caliber weapons were used in the open firing. The area where the attack took place is quite dark, making it very difficult to identify the attackers. Rifles and an 8mm pistol were used in the attack, National Police spokesman Colonel Dimakatso Cello said.

In another incident, four people were killed in an attack on a bar in Sweetwater Township in the city of Pietermaritzburg on Saturday night. Two men entered the bar and opened fire indiscriminately on people, police said. Two people died on the spot while two others were pronounced dead at the hospital and four others were injured. KwaZulu-Natal Police Commissioner Jan. Police are investigating the incident, Enlanla Mkhwanazi said. Recently, 21 minors were found dead in a bar in east London. The cause of his death is not yet known, authorities said. The attack on the bar in just two weeks has caused a sensation across South Africa.