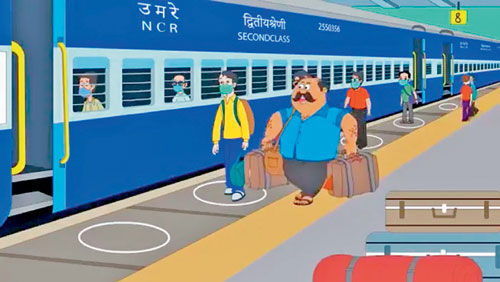 A railway official was trying to sleep in his cabin at the speed of the narrow gauge, interrupting his fun, the PA said.

Saheb said, ‘You have subjected me to emotional torture by watching the clips of the film ‘Bagbaan’ on your mobile phone. ‘

‘Sir, there is no clip that the railways have become like the youth of today. He does not have enough money.’

Gave the green signal of the consent of sir,’ so it is true. Railways has become very young after dynamic officers like me. Dazzling and speedy.’

‘Sir, but the stupid people of this country are criticizing that the railways has lost sight of the tickets of these houses too.’

Sahib narrowed his eyes and said, ‘Don’t worry about your eyes. If necessary, we will also install a CC camera on the door of the toilet. People will know how long the line is outside the toilet while sitting on their seats and will not sigh till the end. ‘

‘Sir, people are asking why one and a half hundred year old railways are sighing of tourists. Instead of stopping the 50 percent concession, it was to be increased according to the actual age. 60 percent for 60 years old, 75 percent for 75 years old and 100 years old traveler should be arranged so that the railway will send a carriage from home to the station.’

Sahib started speaking in the style of an announcement on the platform, ‘How do people know that the railways had a loss of 1500 crores in this senior citizen concession. Railway grand total is in loss of 28,000 crores. Say, somewhere to reduce the loss or not? I am sitting here in the chamber not eating any puffs, but only dreaming of reducing the losses of the railways. ‘

The PA gets upset and says, ‘Sir, if the health of officials like you deteriorates by daydreaming, the loss of the railway will also increase. Rather privatize this dream work like other operations of our railways. Solicit suggestions from people to reduce losses. ‘

“Youngsters charge their mobiles and laptops for seven and a half hours in an eight-hour journey and charge extra.”

‘If people take a bath instead of washing their mouths at the wash basin in the coach, charge them per litre.’

‘Take extra charge for more than four bags in two tickets even in planes and trains.’

‘To save money on porters, collect self-luggage handling charges from those who pick up bags themselves.’

Take home food enjoyment tax from those who burn the lives of those who take tea bags and thermos from home and eat sandwiches of the Himalayan temperature of the caterers. ‘

‘Impose question duty on enquirers at the counter despite all notice boards and announcements.’

A suggestion was made to find bundles of past loss reduction reports of the railways and sell them in Pashti so that the losses would be reduced a little. A provision is being seriously considered in the next railway budget to reward this suggestion as the best suggestion.

A seasonal suggestion has come from the Saurashtra side to legalize betting on which train will have a waiting period. Guaranteed to bring so much profit that all the children get tickets for free!