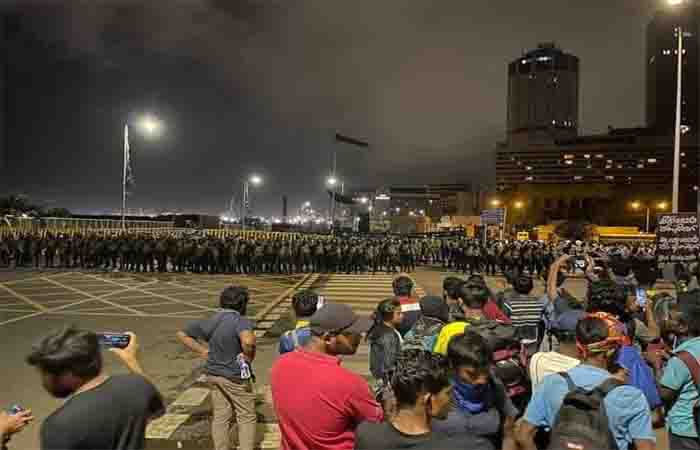 – Rajapakse family has installed Vikram Dinh as their pawn: demonstrators

The Sri Lankan Parliament has been in a state of crisis amid economic and political crisis. Former Prime Minister Ranil Wickremesinghe was elected as the new President on 20 July. However, protests continue on the roads.

A clash broke out between soldiers and demonstrators outside the grounds of Sri Lanka’s Presidential Secretariat in Colombo late Thursday night. Meanwhile, 9 people were arrested and more than 50 people are said to be injured.

Armed forces were deployed to quell the protesters outside the Presidential Secretariat grounds. The soldiers started tearing down the tents of the demonstrators to control the demonstration, which enraged them. After that, the protestors gathered on Galle Face and started shouting slogans against the government.

The demonstrators said, ‘Ranil Wickramasingh wants to destroy us. They are doing it again but we will never give up. “We want to rid our country of this kind of cheap politics,” said one protester amid the crackdown by the armed forces.

Demonstrators allege that the Rajapaksa family has installed Vikram Dinh as their pawn. Hence the situation is not going to change. They say that Rajapaksa has made a deal with Wickramasingh to save his position. He has cheated people.

Meanwhile, Bill Burns, the head of America’s intelligence agency CIA, blamed China’s diplomacy for Sri Lanka’s current economic situation. Sri Lanka could not understand China’s stake and fell into debt trap. He said that the biggest reason for Sri Lanka’s economic ruin is the huge investment by China in the form of loans. This mistake of Sri Lanka should be taken as a warning to other countries. A lesson should be learned from this.