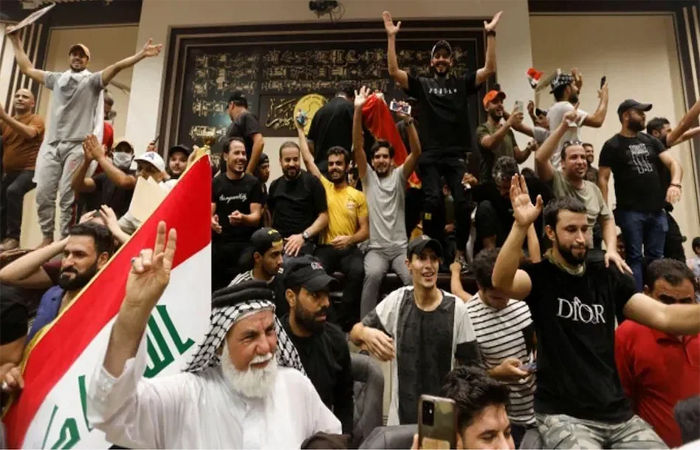 – The protesters, mostly supporters of the Shiite cleric Mustada al-Sadr, seized the parliament when the building was empty, but the guards let them in.

Baghdad: Sri Lanka-like situation is prevailing in Iraq as well. There too, food shortages and ever-increasing prices of commodities are spreading unrest among the masses. People come on the road. The outrage escalated to such an extent that the protesters stormed the Parliament House and took over the building as the building was empty so the protesters climbed onto the chairs and tables of the House. Most of these are supporters of the Shia cleric Mustadha al-Sadr. The protesters are only protesting the candidacy of former minister and former provincial governor Mohammad Shia al-Sudani for the post of prime minister by an Iran-backed party.

Protesters stormed into the heavily guarded Green Zone, government buildings, and even the homes of political leaders, including ministers, after storming into Parliament House on Wednesday. However, the building was empty at that time.

Al-Jazeera news agency reports that there were also guards at the gates of the Parliament building at the time. He allowed these protestors to enter the building only for two rock-talks. They climbed over the tables and chairs of the house. The video of which has also gone viral. They also tore down the cement concrete wall surrounding the parliament building, and started shouting slogans like Al Sudan out Al Sudan out.

Such demonstrations were held not only in Baghdad but in almost all the cities of Iraq.

Iraqi Executive Minister Mustafa al-Qadimimo ordered protesters to vacate the Green Zone and deployed security forces to protect government buildings and diplomatic missions. Demonstrators used water cans on them as they demonstrated in the street and on the road.