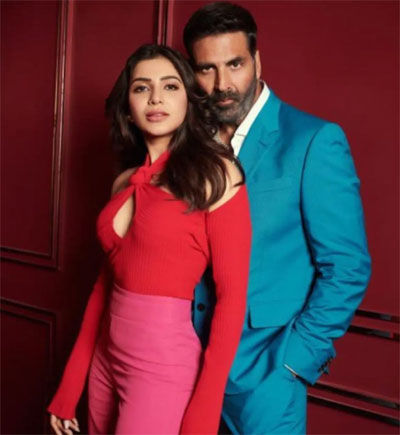 – Talk of Karan Johar signing both of them in a film together: Samantha’s fans increased after the talk show

South’s top heroine Samantha is getting films one after another in Bollywood. Now there is talk that Karan Johar has also signed him for a film opposite Akshay Kumar.

In fact, it was only when Karan Johar put Samantha and Akshay together on a talk show that people wondered why Samantha and Akshay would have been chosen. But, it has now been revealed that Karan Johar, known for the marketing gimmick of Jaatbhaat, has knowingly brought the co-stars of his upcoming film together in a chat show.

Samantha has been seen by the Hindi audience only through Pushpa’s Antwa item song and the Family Man series. However, its popularity has grown since then. The number of fans has increased after the way Samantha gave answers in this talk show and especially about her divorce with Naga Chaitanya and the frank and bold talk about the fees she gets against Akshay.

Samantha is getting films one after another in Bollywood. His debut film is coming up with Ayushmann Khurrana. Taapsee Pannu has also chosen Samantha as the lead heroine in her production. Now Karan Johar is also rumored to sign him in a film of his own production with Akshay Kumar.