Former Prime Minister Shinzo Abe, who has dominated Japanese politics for two decades, has been shot dead as he addresses a crowd on a street in the northern city of Nara as part of his Upper House election campaign. A 41-year-old man named Tetsuya Yamagami fired two shots from a hand gun at a distance of 10 meters.

Shimbo lost his balance as one bullet after another penetrated his body. One bullet struck him directly in the chest, so he could not be saved despite treatment. He was wearing a gray T-shirt and a helmet. He remained calm even after Shinjo Ambe was shot. There was no tension on his face. He did not try to escape but pulled over after being caught by security guards. 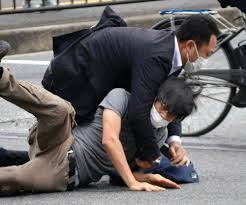 Tesuya Yamagami, who was shot with a handmade gun, was a member of Japan’s Self-Defense Force. The incident happened at 11.30am, according to local news from Japan. According to police, the assailant was angry and was about to commit the murder.

Democratic Liberal Party officials were present at the venue along with Shinzo. He was not injured in any way. Therefore, the intention of the person who suddenly rushed was to kill Shinjo. Japanese President Fumio Kishinda announced that the background of the attacker was not yet known.