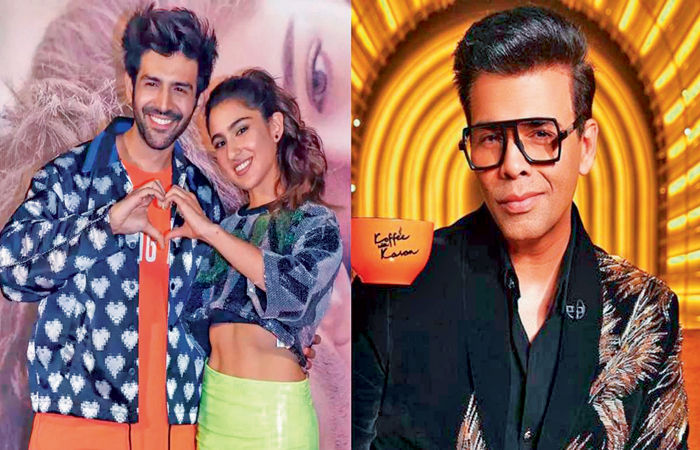 – Karthik and Sara’s affair was going on

MUMBAI: Actress Sara Ali Khan, daughter of Karthik Aryan and Saif Ali Khan’s daughter, who is emerging as one of Bollywood’s top heroes, is said to be upset with filmmaker Karan Johar himself after a scandal broke out.

Recently, Karan Johar was so arrogant that during my show, love chapters of many Bollywood couples have been leaked or even exposed. However, according to rumors circulating in Bollywood, Sara Ali Khan and Karthik were once in a very close relationship, but for some reason, both broke up. The two never revealed their relationship. But, this open secret is very obscure as Karan Johar has revealed it in this way. Even though Sara is a star kid, she has not been launched in Bollywood on a large scale nor has she got a thriller and a strong role. Her debut film was to be made by Karan Johar.

Since then his career has gone up and down. Sara had high hopes for Atharngi Rethi, a film with Dhanush and Akshay Kumar, but for some reason, producer Anand Rai released the film directly on OTT.

In these circumstances, Sara wants people to talk about her films and acting. She doesn’t want gossip about her personal life. But, Sara’s father Saif Ali Khan and Karan Johar are very close friends. Karan Johar’s dominance in Bollywood, from films to awards and endorsements, is such that no one wants to spoil his relationship with him. In these circumstances, Sara can do nothing but express her displeasure in front of her personal circles.