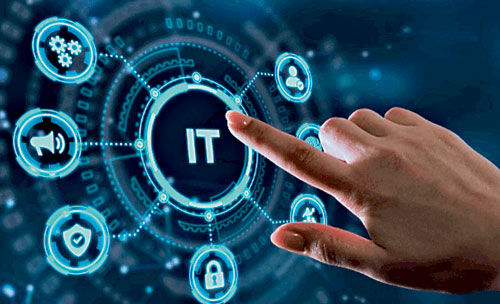 Can the IT industry sustain its overseas earnings amid continued rupee depreciation? Or will the combination of rising costs, a shortage of skilled workers and a possible global recession result in a slowdown in growth? IT companies’ Q1 results as well as management estimates suggest that margins will ease. The companies are confident of getting new orders but all of them also spoke of increased pressure on margins. The Nifty IT index has fallen 30 percent since January 2022, much higher than the six percent fall in the Nifty. In earlier periods, whenever the rupee was under pressure. IT industry proved to be very profitable for investors then. Because his income was in dollars. While other expenses were in rupees.

Recent results suggest that margins are under pressure and demand is easing as overseas customers cut discretionary spending on IT. If we look at the big four companies in the IT sector, Infosys’s profit in rupee terms grew by only three percent year-on-year, while its revenue grew by 24 percent. The operating profit margin of the company has decreased by 3.5 percent. Tata Consultancy Services’ operating profit margin fell 2.5 percent, while Wipro’s operating profit margin hit a four-year low, while HCL Technologies’ margin also hit a multi-year low. Smaller IT companies also observed a similar trend of flat margins and flat margins. For example, Tech Mahindra’s operating profit margin declined by 2.25 percent. The entire industry is surrounded by negative trends. Staff costs are going up, office rent is going up, travel costs are going up. Dropout rate in big companies is more than 20 percent. Evidence suggests that India’s unicorn companies are also competing to hire the same talent, and subcontracting work to small enterprises has also increased due to the needs of startups.

At the same time, foreign clients are also re-examining corporate IT budgets and focusing on essential spending. They are well aware of the rupee and dollar trends, so they are also negotiating lower dollar rates. That is, despite the increase in expenditure, there is a decrease in income. While Western Europe appears to be headed for recession, it is also possible that North America will experience an economic downturn. Of course, most companies are optimistic about maintaining their business momentum with new contracts. Interestingly, some analysts associate the possibility of rising incomes with recession-like conditions. Western Europe is constantly looking for ways to outsource and reduce costs. In addition to this possibility, customers around the world will continue to move towards projects related to cloud, fully digitized services, analytics, artificial intelligence and motoverse as these are all driven by infrastructural factors. But the focus may remain on cost reduction in the near future.

Even big global digital companies like Alphabet and Meta are admitting they are under pressure from rising valuations. Customers in the banking and financial services sector are also gearing up. Because they face higher policy rates, while manufacturing everywhere in the world suffers from supply-side constraints and consumer demand remains low due to inflation. A downtrend is an indicator on this scale in the market. The revenue and profits of IT companies may be affected in the near future.