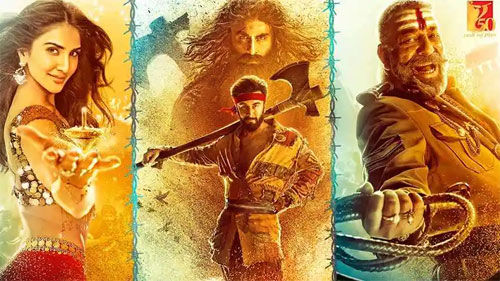 Ranbir Kapoor’s film Shamshera, which released on Friday, has once again disappointed the audience. This film did not fulfill the expectations of the people. The film earned only Rs 10.25 crore on the first day of release. Fans on social media have called the film a flop. Now, comments are being seen on social media that only Yashraj Films can save Tiger and Pathan.

Yash Raj’s film also failed to earn at the box office. After the film Bunty Aur Babli, Jayesh Bhai Jordaar, Samrat Prithviraj, Shamshera has joined the list of one more film flop at the box office. It is also said that the film’s collection at the box office came as Ranbir Kapoor’s fans got to see him on the silver screen after three years. Everyone was hoping for 14-15 crore rupees for the first earnings of this film which has failed.

Starring Ranbir, Vaani Kapoor and Sanjay Dutt, the film has fared beyond expectations. Bollywood films are hitting the box office upside down. Apart from Karthik Aaryan’s Bhoolaiya Two, most of the Hindi films released after the Corona epidemic have disappointed the audience. Ranbir’s Sanjay Dutt biopic was a hit. Four years later he was seen acting on the silver screen. After the success of her Sanjay Dutt biopic, people had high hopes for her. Also he was supposed to be seen in a different look in this film which he failed to do.

Interestingly, this film has received 4350 screens in India and 5550 screens worldwide. However, this film was not seen doing particularly well.

In the film Shamshera directed by Karan Malhotra, Ranbir Kapoor has played a double role as a dacoit. He has played the role of both father and son.