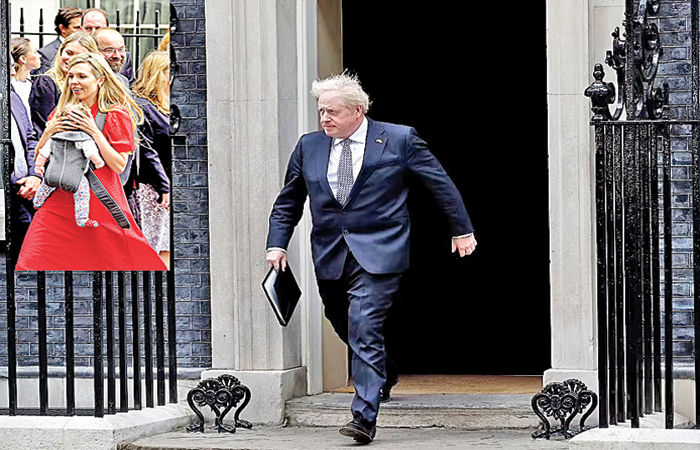 Johnson agrees to step down following resignations of more than 20 ministers, including Rishi Sunak and Sajid Javed: PM to remain in office until new leader is elected in October

LONDON: Boris Jones, who came to power by a landslide during the Brexit dispute between Europe and England, finally resigned as Britain’s prime minister on Thursday. Despite the resignations of the top four ministers, including Finance Minister Rishi Sunak, and the revolt by his own MPs, Boris Johnson was unwilling to step down. But Boris Johnson finally agreed to step down on Thursday after more than 20 ministers resigned in the last three hours. After resigning, he said he would remain prime minister until a new Conservative leader is elected. Johnson was under intense pressure from several colleagues in the cabinet, including Home Minister Preity Patel, to demand his resignation in the wake of several scandals, including Chris Pincher’s sex scandal.

Many of Boris Johnson’s colleagues said Johnson was no longer fit to remain prime minister because he was embroiled in a series of scandals, including Chris Pincher’s sex scandal. Now a new leader of the party will be appointed in October, who is expected to become the new prime minister. Boris Jones, 6, blamed “mob instincts” for his resignation.

“I’m very sad to be resigning from one of the best jobs in the world,” he said in a speech at 10 Downing Street. It is now clear that a new leader of the parliamentary Conservative Party will be elected. His program will be announced next week. Jones, who is stepping down as PM, insisted that he had won an “extraordinary majority” on the Brexit issue in the 2016 general election. This is the reason why I have been fighting for the last few days to remain PM.

Following the incident, Finance Minister Rishi Sunak and Health Minister Sajid Javed resigned on July 9. “People hoped that the government would work properly while Sajid Javed wrote that the government was not working in the interest of the nation,” Sunak wrote. Apart from this, two other cabinet ministers also resigned. However, Johnson was unwilling to step down. Since then, however, more than 50 ministers have resigned in protest. Earlier, Boris Johnson’s prime ministership was jeopardized by the Partygate scandal, but he managed to save the chair. At the time, more than 50 Conservative lawmakers demanded Johnson’s resignation, but PM Johnson won a vote of confidence. This time, however, it was difficult for him to win the confidence vote.