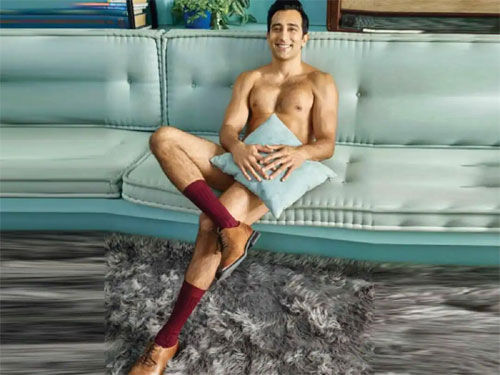 Actor and model Rahul Khanna created a lot of discussion by posting his almost naked photo on social media. According to Rahul’s claim, he has posted such a photo to hint that he is going to make a big revelation. Many heroines also passed comments on this photo.

Rahul is sitting comfortably on a sofa in this photo and has covered his private parts with a cushion. Also she is wearing dark red long gloves and brown shoes. Rahul has said in the caption with this photo that I am hiding something. But now it’s time to tell everyone. Tomorrow I will reveal something big.

Veteran actor late Son of Vinod Khanna and brother of actor Akshay Khanna, Rahul has also acted in a few films but is better known as a model. Recently, Janhvi Kapoor said in a chat show that she has stocked Rahul Khanna on social media. After that today some netizens also wanted to know what Janhvi thinks about this nude photo of Rahul.

Some heroes have already tried the chemistry of creating a stir by posting nude photos in Bollywood. Recently, South star Vijay Devarakonda posted such a photo to promote his film. Years ago, Aamir Khan released a nude poster with only a tape recorder to promote his film PK.