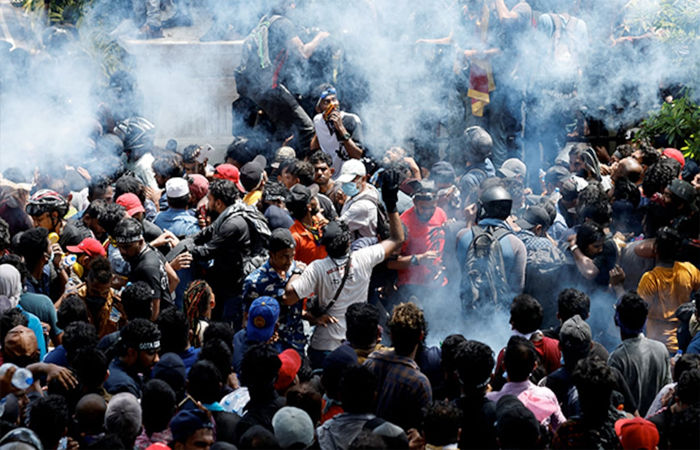 The Sri Lankan people have attacked Parliament and the PM’s house after Gotabaya fled the country. They are being lathicharged. In the midst of all this, Prime Minister Ranil Wickremesinghe has had to declare a state of emergency in Sri Lanka. At the same time, rioters have been arrested and their vehicles confiscated.

The uprising in Sri Lanka is at its peak after President Gotabhaya fled the country. After besieging the PM’s residence and Parliament House today, a furious mob stormed the office of the government news channel. Not only that, a protester came and sat in the place of the news anchor and came live and started speaking. The TV channel then had to stop broadcasting.

The people of Sri Lanka have taken to the streets after President Gotbay fled the Maldives. When the police tried to stop the crowd on entering Parliament House and PM House, there was a riot. 10-12 rounds of fire were also fired into the air to intimidate and disperse the protesters but it had no effect on the masses.

– Sri Lankan President Gotabaya Rajapaksa fled the country late at night. They have reached the Maldives by military plane. He arrived with his wife and about 10 others. From there Rajapaksa can go to Dubai. Gotabata has not yet resigned from the presidency. It is believed that he will resign after reaching where he wants to go from Dubai.

– Gotabaya has fled the Maldives without resigning. So the protesters are more annoyed. Because it has stopped the formation of a new government.

– Protesters, angry over Gotabaya’s escape, stormed Parliament House and PM House today. Thousands of protesters were stopped by security forces a short distance from the parliament building. But protesters broke through security cordons and stormed the PM’s house. These people were also demanding the resignation of PM Ranil Wickremesinghe. Ranil Wickremesinghe’s private residence was earlier set on fire by protesters.