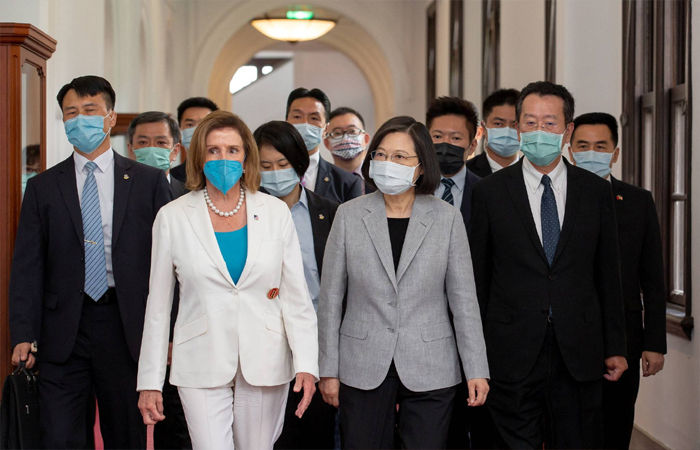 US Speaker Nancy Pelosi visited Taiwan President Tsai Ing-wen this morning. After that a list of several high profile seats is scheduled. Pelosi will also meet Mark Liu, chairman of TSMC, Taiwan’s largest semiconductor maker. TSMC is also going to set up a huge semiconductor factory in America. It is certain that China will become more agitated due to such meetings of Nancy in Taiwan.

The US House Speaker reached Taiwan and said that he was honored to be addressed as a ‘good friend of Taiwan’. They have 3 main objectives behind traveling to this self-governing island of Taiwan.

1. Security first, security for our people and global security

Pelosi made the statement after a conversation with Taiwan’s deputy speaker. US House of Representatives Speaker Nancy Pelosi said her delegation arrived in Taiwan for ‘regional peace’. With this, Nancy Pelosi has become the highest-level US official to visit Taiwan in the last 25 years.

Live broadcast of the meeting

After the meeting with MPs, US Speaker Pelosi visited President Tsai of Taiwan at the Presidential Office. Surprisingly, the meeting was telecasted live, avoiding the issue of privacy.

Pelosi herself said she wants to increase inter-parliamentary cooperation and dialogue and for this she wants to work specifically with Taiwan. The new US law, aimed at strengthening the US chip industry in the face of competition with China, offers more opportunities for US-Taiwan economic cooperation, he said.

The article warned China with intent to travel to Taiwan

Pelosi wrote an article in the Washington Post after arriving in Taiwan. Pelosi titled the article, ‘Why Am I Leading the US Congressional Delegation to Taiwan?’ Titled as such. He has written that, 43 years ago, the US Congress passed the Taiwan Relations Act. The then US President Jimmy Carter signed it.

The Taiwan Relations Act is an important pillar of US foreign policy in the Asia Pacific. This act reaffirms America’s commitment to Taiwan’s democracy. Through this act, we advance economic and diplomatic relations with Taiwan.

America is committed to Taiwan’s security

Pelosi wrote that America is committed to the security of Taiwan. If Taiwan’s future is changed unilaterally and forcibly, it will be a threat to the Western Pacific. It will be worrisome for America.

America should once again recall this contact of its own. China has dramatically escalated tensions with Taiwan in recent years. The People’s Republic of China has continuously sent its fighter jets, patrol bombers and surveillance aircraft to Taiwan’s airspace. According to the US Department of Defense, China is trying to contain Taiwan. China has also targeted Taiwan’s cyberspace. China attacks Taiwanese government agencies every day.