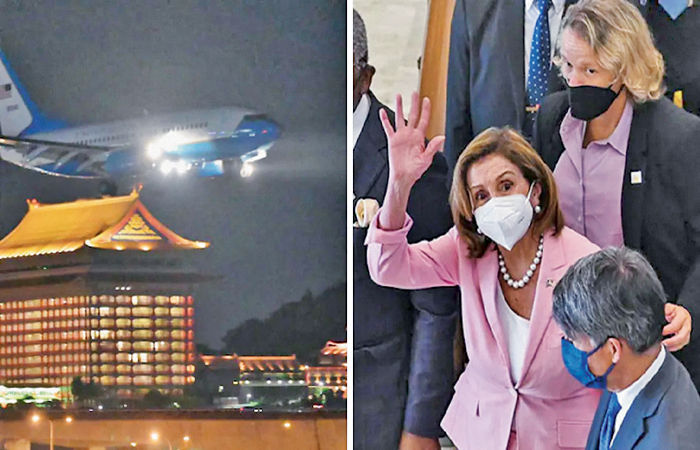 Beijing: The Speaker of the American Parliament, Nancy Pelosi, has reached Taiwan, criticizing China’s threats. Earlier, Global Times claimed that a Boeing C-40C was carrying Nancy Pelosi to Taipei. Eight US F-15 fighter jets and five tanker planes flew from an American base in Okinawa, Japan to provide security for Pelosi’s flight. In addition, Nancy Pelosi became the first American leader in the last 25 years to visit self-ruled Taiwan.

Pelosi has authorized the US Air Force to shoot down aircraft carrying Taiwan in the event of any Chinese attack. Before Pelosi landed, China closed the airport over Taiwan to all civilian aircraft. A video shows Pelosi being welcomed atop Taiwan’s tallest building. On the other hand, some are protesting Pelosi’s trip, accusing her of putting the country at risk.

China has also announced live-fire drilling in the South China Sea in response to Pelosi’s visit. The US on Tuesday deployed four of its warships and an aircraft carrier to the eastern region of Taiwan in what it called its daily exercise. Earlier, the US deployed its two aircraft carriers, dozens of warships and three submarines very close to Taiwan’s border. China also deployed large-scale lethal warships and fighter jets towards Taiwan. Sharing on social media, the Chinese army is visible in the sea, from where the island of Taiwan is only 10 km. is far away

Chinese Foreign Minister Wang Yi said Washington’s betrayal on the Taiwan issue would significantly reduce its credibility as a nation. Some American politicians are playing with fire on the Taiwan issue. They will certainly not get good results from it. Upon landing in Taiwan, Pelosi said her visit was a symbol of America’s support for Taiwan’s democracy. He said that our visit is similar to that of various political delegations visiting Taiwan. This does not change our previous position regarding it. It is equally clear that we are not reverting to our previous stance because of this.

Following Pelosi’s arrival, a Taiwan-to-Alert was declared in Taiwan. When sirens started sounding in China too.