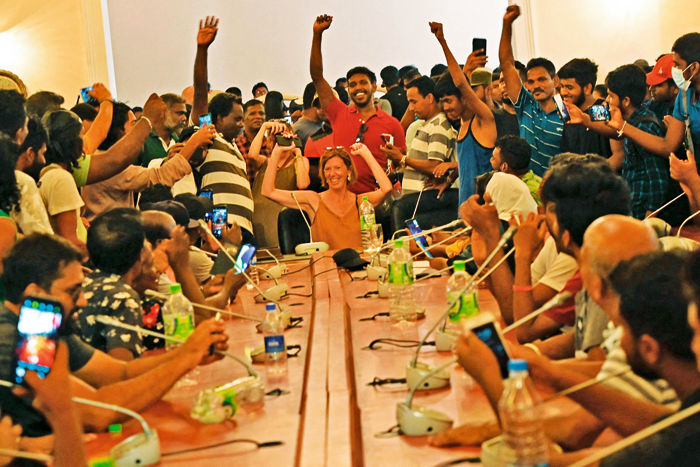 In Sri Lanka, which is facing its worst economic crisis in seven decades since independence, the main opposition parties have finally agreed to form an interim all-party government. An interim government will be formed after President Gotabaya Rajapaksa resigns on Wednesday. The Opposition met on Sunday to form an all-party government after Gotbaya Rajapaksa announced his resignation from the presidency. Anti-government protesters, on the other hand, stormed the President’s residence for the second day in a row, claiming to have recovered 1.5 crore Sri Lankan rupees. Army chief Shaivendra Silva, on the other hand, appealed to the people to keep the peace. In addition, another cabinet minister resigned on Sunday. Meanwhile, police have arrested three suspects for setting fire to Prime Minister Ranil Wickremesinghe’s house. Missing President Gotbaya Rajapaksa, on the other hand, has ordered gas distribution.

The prime minister resigned after protesters occupied the presidential residence and Prime Minister Vikram Singh’s private residence on Saturday in the wake of the island nation’s extraordinary economic crisis, and President Gotbaya Rajapaksa announced his resignation on Wednesday. Following his announcement, a meeting of the main opposition parties was held on Sunday to form an interim all-party government to pull the country out of the current crisis. “We have agreed to form an interim government for a limited time and then hold parliamentary elections,” said Ranjith Mudduma Bandara, general secretary of the main opposition Samagi Jan Balvegaya. Our intention is to get the country out of the current crisis.

Meanwhile, anti-government protesters have claimed that they received 1.5 crore Sri Lankan rupees from the President’s residence. Hundreds of people unhappy with government policies also broke through barricades in the high-security Fort area of ​​central Colombo on Sunday and broke into the presidential residence. Videos of people counting rupee at the President’s residence also went viral. People handed over the rupee to the local police.

Protesters demanded the immediate resignation of President Gotabaya Rajapaksa, blaming the Rajapaksa family for the island nation’s worst economic situation. “People sleep in ACs when there is no electricity in our homes,” said a protester who broke into the presidential residence. Thousands of protesters stormed the presidential residence on Saturday, enjoying a bath in the swimming pool, sleeping in the bedroom, and snacks in the kitchen.

Meanwhile, Sri Lankan Army Chief General Shaivendra Silva appealed to the people to maintain peace in the country. Another cabinet minister, Dhammika Perera, resigned on Sunday following the unrest in the country. He was the Investment Promotion Minister in Ranil Wickremesinghe’s new government for 15 days. So far, four ministers have resigned. Earlier, Harin Fernando, Manusha Nanayakara and Bandula Gunavardha had resigned. Amid unrest in the island nation, police on Saturday arrested three suspects in connection with the burning of Prime Minister Ranil Wickremesinghe’s private home in Cambridge Place. More arrests could be made in this regard as he expands the scope of the investigation, police said.

Missing in the midst of all this, President Gotabhaya Rajapaksa on Sunday ordered the authorities to distribute cooking gas in the country. Protesters seized the President’s residence late Saturday night and demanded that Parliament Speaker Mahinda Yapa Abeyvardane resign on Wednesday. However, their whereabouts have not yet been revealed. Gotbaya Rajapaksa said in an official order on Sunday that the first ship arrived at Keralawalapitia on Sunday with a supply of 4,500 metric tonnes of cooking gas. Officials to ensure its proper distribution. The second ship with 2,50 metric tonnes of gas will arrive on July 11, while the third ship with 2,200 metric tonnes will arrive on July 15. The CEO of a Sri Lankan gas distribution company said the gas problem would end by the end of this month.