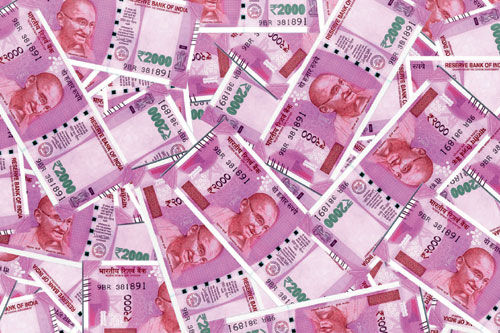 – We should see the piles of pink money of the leaders and be happy that the economic health of the country is pink.

Takubhai used to sneak into the print of a brother sitting on the bench of the common plot of the society. The brother got angry, ‘You want to smell the print? ‘

‘I want to check this photo,’ said Takubhai, showing a photo of wads of notes printed in the press.

The brother started laughing. ‘Good man, even if we add up the total income of seven generations of you and me, it will not amount to so many crores. Don’t dream wrong. ‘

‘No dream, I am checking whether this is called black money or not? ‘

That brother lost his mouth. ‘O sir, the photo printed in the press is of the notes seized from that Bengal minister. This is called 100% black money. What is there to ask in this?

‘But these are all pink notes. It means that black money is going to be eradicated after demonetisation. Pink money came in its place.’

The brother’s eyes turned red. ‘O Mister, I have no black money. I pay the printing bill from my purely accounting white earnings. Let me read the print in peace to collect my money. ‘

Hearing this ho-ha, three or four people who had gone out for a quick talk in the name of morning walk in the garden of the society also gathered there. Takubhain, like a leader, saw the crowd and climbed up. ‘Look, look… there is no such thing as black money. Check the photo of this thappia. All notes are rosy pink. This is pink money. ‘

As if one or two people did not believe in Takubhai’s claim, they actually began to see their heads stretched in the press. One person even tried to grab the print. That brother was spoiled. ‘Hey man, this isn’t public money you can think of.’

A brother came to Takubhai’s support. ‘It is true. The photos in the print show only pink money, not black. ‘

The third brother started laughing. ‘Dude, you have made that kaccha papad look like pakka papad. Say it again, it was fun. ‘

The fourth brother teased. ‘ We earn the white and all these collect the colorful money. Well, let us have fun in all such fun. Look, what kind of notes leaders enjoy printing’

The fifth person says, ‘Oh no man, look at the lengths this brother went to save his money. Only those like us who work hard for every penny can enjoy such fun.

We can at least count on our hands. This Netaji collected 50 crores but never had the happiness of counting. We can hardly believe that the leader of one state could collect so much pink money, it means that the economic health of the country is pink. ‘

‘Alya, who has lost this five note like transparent money wrapped in white plastic?’ Bhai said while reading that print. All the wise citizens forgot the crores of pink money and bowed down as if they were respecting this white money.

The time is ripe, now the government should directly print one lakh notes. Leaders have to keep the whole flat instead of a bag!