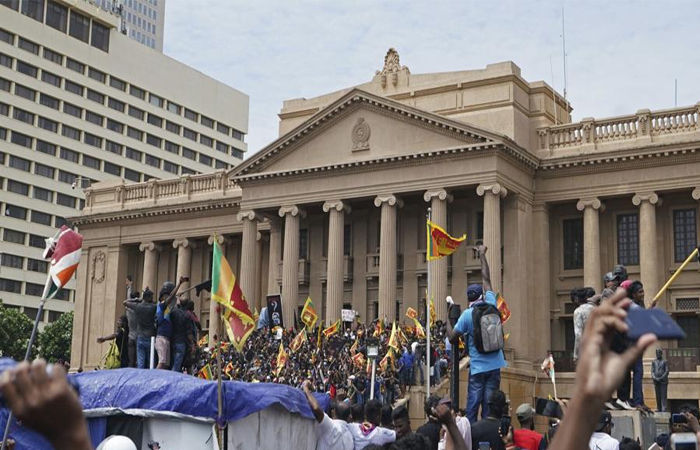 Rising prices, shortages of essential commodities such as food and milk, long lines at shops, robberies at department stores, political infighting, anti-government protests and the deteriorating situation in neighboring Sri Lanka have left people around the world worried. Trapped in bad economic decisions, cheap interest rates, free schemes and જાળ 50 billion in foreign debt, Sri Lanka is on the verge of bankruptcy.

In this state of crisis, the hopes of the people are being dashed. People are on the road against the government. The Prime Minister has resigned. MPs-ministers and city mayors are constantly attacking homes. Troops are firing on violent crowds everywhere. This is the first time such a crisis has befallen Sri Lanka, which became independent in 1948.

How did Sri Lanka get into trouble?

Amid rising Koro crisis over the past two years, the government’s decision to reduce taxes to meet foreign debt and 2019 election deadlines has pushed Sri Lanka into crisis. The price of flour-milk-medicines has reached thousands. Despite the high cost, it became difficult to get the goods, so people resorted to violence. Looting began in department store-malls and shops. As the prices of essential commodities continued to rise, so did the debt.

The crisis reminded people of the bankruptcy of Venezuela and Greece when the system of these countries failed and the people faced a state of chaos.

The economic crisis that began in Venezuela in 2017 declared the country bankrupt. Foreign debt and misguided economic policies made the currency situation so bad that the government had to print 1 million bolivar notes. The value of the currency became so bad that people had to pay 25-25 lakh bolivars for a cup of coffee.

In July 2020, the South American country of Argentina suddenly went bankrupt. Foreign investors began demanding પાછા 1.3 billion in return on their bonds. Banks and financial institutions have explicitly refused to repay this debt. Argentina blamed the United States for the situation. It became difficult for people to cope with inflation.

The last decades have seen the world go bankrupt. Greece’s economy has been in crisis since 2001, when it adopted the euro instead of its own currency. Rising salaries of government employees and rising government spending in 2004 plunged the exchequer into heavy debt. The 9 billion euros spent on hosting the 2004 Athens Olympics plunged the government into crisis.

In 2008, three banks in the Nordic country Iceland defaulted on 85 billion in debt. The bankruptcy of the banks greatly affected the economy of the country. A crisis situation arose for the currency. People lost their jobs. People failed to repay the loan. People’s savings were exhausted, on the other hand, there was an employment crisis.

After the dissolution of the Soviet Union in 1991, Russia’s debt continued to rise for several years, leading to bankruptcy in 1998. The currency had to be devalued so the price had to be reduced. As soon as the default occurred, the foreign exchange reserves suddenly suffered a loss of 5 5 billion. It became difficult for ordinary people to get employment-loans and essential goods. This has affected not only Russia but also Asian markets, the Americas, Europe and the Baltic states.

In 1994, the Mexican government devalued 15 percent of its currency against the dollar. This made the situation worse. There was a stir among foreign investors. They started withdrawing their investment money from the Mexican market, selling shares. The crisis saw a decline of up to 5 per cent in GDP. The country owed up to 80 80 billion. The IMF, Canada, the United States and Latin American countries provided a bailout package to help Mexico recover from the crisis, which helped Mexico and its neighbors deal with the economic crisis.

Large-scale canal construction projects began in the United States in the 1840s. The government spent up to 80 80 million on debt. This led to a series of economic crises that left 19 US states in debt. Trapped under state debt like Illinois, Pennsylvania and Florida. Apart from this, the use of government capital for setting up new banks was also exacerbating the crisis.