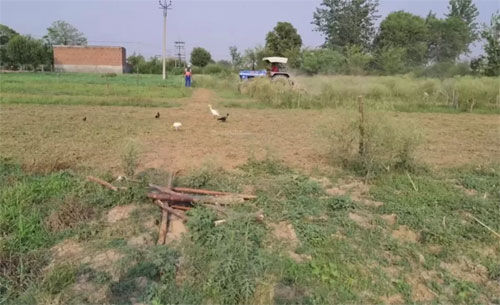 – ‘Indifference of the system in preventing encroachment on Govt/Gauchar lands’

As stated in Section-37 of the Land Revenue Act, 1879, all lands other than legally privately owned lands belong to the State Government and the lands owned by the State Government are mostly used for various purposes of the State Government or the agricultural lands of the State Government which are placed on the final list in terms of revenue. It has to be disposed of according to the rules, but now such lands are not left, when the Land Revenue Act was enacted, i.e. 144 years later, during the British rule, using the foresight to suit the Indian situation, knowing that even in those days, people would encroach on the government lands. In Section-61 of the Revenue Act, there are provisions to levy penalty for unauthorized occupation in case of encroachment on government land and summary eviction as per Section-202. Recently, Revenue Department Circular No. 16-7-2022 – Daban-202010/1016/L to maintain government land and to prevent unauthorized encroachment on it and before that to remove unauthorized religious encroachment on government land also dated 11-4- Circular 2022 has been issued. Apart from this, as per the circular dated 9-8-2019 of the Revenue Department, a special task force has been formed under the chairmanship of the Municipal Commissioner and Collector to remove encroachments on government lands and also unauthorized religious places and to maintain the lands and to carry out circular surveys to implement the same. The attention of the revenue authorities has been drawn.

The primary responsibility of the revenue authorities is to maintain government land and prevent unauthorized encroachment on it. Now there is no need to understand government land i.e. land owned by revenue department. As a basic element all lands are government. E.g. Gauchar Land These lands are exclusively handed over to the respective Gram Panchayats for administration for the purpose of village maintenance and the maintenance of the same is the responsibility of the respective Gram Panchayats. Gram Panchayat cannot give to others except for the purpose of Gauchar. Can be repossessed when required by the Government for a public purpose and the Collector may take possession of such lands by the Government even if the administration fails to comply with the conditions. Government lands are transferred for public purpose to Mahanagarpalikas/Municipalities like Gauchar lands. It is the responsibility of the concerned authority to maintain it. Apart from that, TP in the municipality. There are lands reserved for public purpose under the Act as well as in the Master Development Plan. Thus the lands under different authorities are considered government lands and all these lands are included in the Land Grabbing Act framed by the government.

In the said circulars issued by the Revenue Department of the Government, the Revenue Officers of the concerned Village / Gram Panchayat Talati – Taluka Mamlatdar / Taluka Development Officer appear. These officers of the Panchayat are also considered as Revenue Officers for this function. As far as Government / Gauchar lands are concerned, the details are as per Village Form No. 8. The Talati of the village concerned and the Circle Officer of the area concerned have to verify all the Government survey numbers in person every year and report immediately to the Taluka Mamlatdar and if there is a CT Survey area to the CT Survey Superintendent and the Taluka Mamlatdar under Section-61 of the Land Revenue Act. Unauthorized encroachment has to be removed by giving notice. If there is pressure on the land of Gauchar, the Sarpanch / Talati of the concerned Gram Panchayat has to give a notice and remove the pressure. They can report to the Taluka Development Officer and get help to relieve the pressure. But the indifference of the revenue system is responsible for all these operations. There may be political interference in this work but it is the duty of the Collector to maintain government lands as per the provisions of law and government circulars giving priority to this work. When we were the Collector of Rajkot, after removing the pressures on the Moka lands, it was noticed that other people were putting pressure on them later. If the state government has given in-principle approval to the proposal, then the collector can fence the important lands and carry out the work under this.

In 2009, the Supreme Court gave a controversial judgment on religious encroachment on government lands and asked all state governments in the country to remove unauthorized religious places on government/local authority lands. Day by day religious places are erected even on government lands / footpaths / public roads and the religious faith is sensitized and resisted. In 2009, we as the first Rajkot Collectorate in the country, based on the Supreme Court judgment, took the initiative to create and implement an action plan to remove all small and large religious places, this requires the will of the administration. The most important thing is that the Land Grabbing Act has been enacted two years back in the matter of government land grabbing and in which the Land Grabbing Act is applicable to the land vested in all the authorities in the said matters and the Government / Gauchar / Municipal Corporation / Municipality / Gram Panchayat. The provisions of this Act are also applicable in all Local Development Authority / Trust lands. According to the information, no exemplary action has been taken by any District Collector. Let us hope that the said provisions are properly implemented to prevent encroachment on government lands.