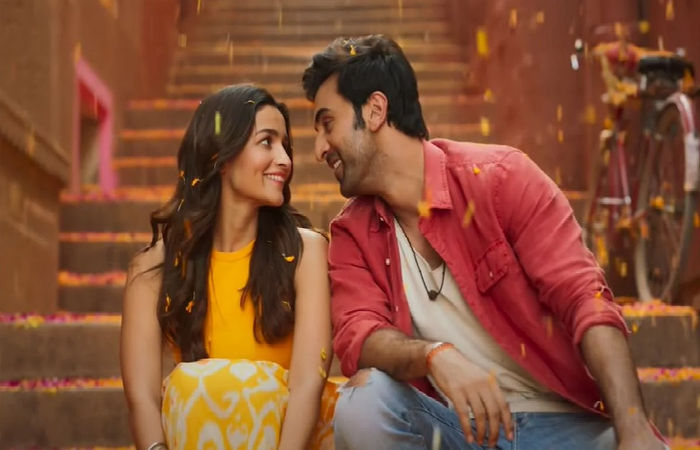 – Ranbir Kapoor also reacted to his Kesaria song at an event

– What matters is that people enjoy Pritam’s music, Arijit’s singing, Alia and my chemistry: Ranbir

‘Kesaria’ song from ‘Brahmastra’ has been in the news ever since its launch. When the teaser of the song was launched, fans were eagerly waiting for it and when the song was released, it received a mixed response from the audience. Netizens trolled the makers of ‘Brahmastra’ for this song. People felt that the ‘love story’ line in the song sounds great. Memes are also being created on social media about this song. Now Ranbir Kapoor and Ayan Mukerji have given their reaction to ‘Kesaria’ being trolled. A video of Ayaan has surfaced in which there is a conversation about that song.

It can be seen in the video, when Ayan Mukherjee is asked, is love story in Kesraya like cardamom in biryani? In this regard, he said, ‘To be honest, we incorporated that beat (love story) in this song with great love. We found it a very interesting twist. So we don’t see it as cardamom.’

Ayan Mukherjee further said, ‘We thought this was a twist. Like when sugar is mixed with a little salt, it has a fun and taste. The lyrics are so traditional and simple that you enjoy it. I think people will like this song more. Ranbir Kapoor also reacted to this song at an event.

– Kesaria song is getting love : Ranbir

At the press conference of ‘Shamshera’, Ranbir Kapoor reacted to the trolls of his Kesaria song. He said, ‘This song is very good. We as filmmakers and artists create something and that is for the audience. We are very excited about the song. He is getting a lot of love. Today memes and trolling are a part of everyone’s life.’

– Alia and my chemistry is important: Ranbir

Ranbir Kapoor further said that as long as people enjoy the song. What matters is Pritam’s music, Arijit’s singing, Alia and I enjoy the chemistry. Let us tell you that ‘Brahmastra’ is a 3-part film, the first part of which will be released in theaters on September 11. Apart from Ranbir-Alia, the film also stars Amitabh Bachchan, Nagarjuna and Mouni Roy.