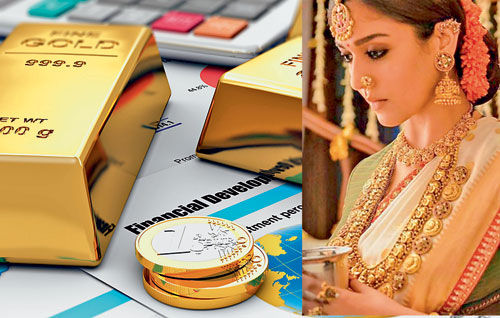 When the name of gold trading will be taken in the VS, the name of Gandhinagar of Gujarat will be taken. Last Saturday was the most searched for gift city among those involved in the bullion market. International Bullion Exchange is a matter of pride for India. Gold is a hotly debated topic. People don’t care about the stock prices of Reliance Industries, but they care about the prices of gold. Because gold is the talk of every household. That is why it has been said that summer sleeps in happiness. There are many forms of gold in India. So is the symbol of prosperity, crisis is the chain of time and Ishtadev is the pleasing aspect. The gold plaques in the country’s temples are worth billions of rupees.

Even today gold is not used as cash but is considered as an asset. This system has been running in India for 3000 years. For some it is a hidden investment while for some it is a show off tool. Housewives are often seen laden with gold ornaments in the houses of Gujarat during festivals especially during the wedding season. But again it is set in its place. That is why India is the largest importer of gold.

South Indian people are more interested in buying gold. Gujarat also ranks third in gold bought in rural areas. Tamil Nadu comes first, then Goa and third comes Gujarat. The global eco system of the gold market did not have much business in India so India started trying.

The NITI Aayog report Transforming India’s Gold Market presented four points to the Modi government. There was a need to create security in India’s gold market eco system to create more employment and more people to indulge in gold trade. After discussing the problems and solutions to investment in gold, the committee noted that there are huge opportunities for gold export but no specific platform for it.

In which there is a special requirement of online data bank, banking facility etc. It is necessary to have data of physical gold, digital gold, industry capacity etc. handy in the data bank. The committee suggested the government to focus on five important issues to meet gold export opportunities in India. This includes making financial transactions related to gold trading easier, tax and duty framework, skill development, technology upgradation and creating alternatives instead of relying on gold imports.

Gold mining, refining and bank help to investors and industrialists in gold were also thought about. The idea of ​​bullion exchange was implemented with the intention that employment can be created if the gold industry is promoted. Gold prices have been rising continuously. Atlage is ideal for its long-term investment.

It may be mentioned here that London’s OTC market is years old. There is a lot of gold trade. According to an estimate, 70 percent of the total business of gold is done in this London market. However, now with the rise of other trading platforms, traders are turning to that direction. So the London market has weakened. America’s future market is also trading in Comex.

Shanghai’s gold exchange Jie: Jillakhai, which started in China in 2002, also became important due to which China’s interest in gold was seen. Used to prefer Singapore for the gold market of Dubai, India, Japan, Singapore, Hong Kong etc.

Some people pay more attention to trading gold than the stock market. Many websites make sense for gold business as its prices are constantly increasing and the investment is considered safe. People earn by trading in it through futures, options and spot prices.

There is no mantra like buy low and sell high in stock market but long term investment in it definitely shows profit. Investing in forex has become more reliable than investing in gold. The reason behind gold prices is related to demand and supply.

Gold production is limited. As new mines come up and production increases, prices will fall. We work there during the golden wedding. In some castes, people show their wealth by giving 50 tolas of gold in marriages.

During the Amrit Mohotsav of Azadi, it should be noted that on the day India became independent i.e.

What is Digital Gold?

When someone invests in digital gold, the company buys the same amount of gold and keeps it safe in a vault in your name. During the corona period, the craze of investing in digital gold increased. At that time, people were afraid to go to gold shops or their dealers’ houses because of Corona. At such a time gold online became an easy solution. During the lockdown, there was a 40 to 50 percent decline in this business.

Historically, gold purchases have been consistent. People used to go to the gold shop and buy the required gold and put it in the bank locker. Then people used to invest in gold bonds, gold mutual funds, gold ETFs (exchange trading funds), gold mutual funds etc. But Corona created new investment opportunities in gold. Which is known as digital gold.

In which investment could be made through Net Banking or Paytm or Google Pay. In which gold can be bought even with a small amount. It can also be recovered. It can also be used as collateral security in online loans. As there is a limit of investment in it, people prefer it less now.