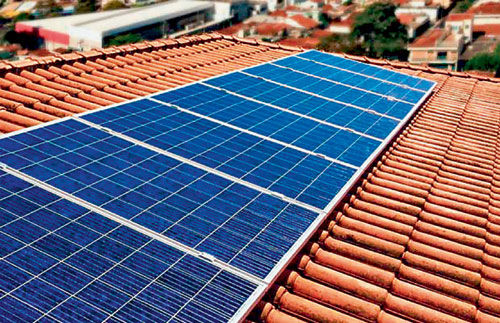 The government has announced a special scheme named, ‘Ghar Ke Upar Solar Is Super’ to create consumer awareness for rooftop solar, which has an important role to play in the development of the renewable energy sector in the country. The government wants to speed up the achievement of its renewable target by increasing the participation of states, municipal corporations and citizens in these schemes, but looking at the statistics of the last four years, it seems that only seven giga watts have been added to the installed capacity of rooftops. At present, the total rooftop capacity is 12 gigawatts, which is about twenty percent of the total solar capacity. The plan was to reach 40 GW of rooftop solar capacity by 2022. The addition of rooftop solar is moving at a slower pace than ground-mounted panels. It is being claimed that rooftop additions are happening at a slow pace due to the uncertain policies of the central and state governments.

Had the central government moved ahead with the renewable energy targets on schedule, it could have played a major role in addressing the coal-fired power shortage. Due to this, 44 lakh tonnes of coal would have been saved with the help of which it would have been possible to continue the power plants. It would have been a relief to see a power shortage in the summer of the current year. The power crisis that the country faced in the recent past was not due to insufficient capacity but due to shortage of coal supply. Sufficient rooftop solar capacity would also have helped in maintaining power supply.

There is scope for extensive use of rooftop solar in domestic and agricultural activities in India. However, power sector experts are saying that the basis of its development lies on each state and its policy. Although India is the country with the most sunshine in the world, our percentage of rooftop solar is very low. Apart from being cheap, rooftop solar is also environmentally friendly. The transmission loss in rooftop solar is less than one percent. One of the reasons for the non-development of rooftops in the country is that state power distribution companies (discoms) are avoiding purchasing power from them. Discoms are considering rooftop solar as their competition. Discoms owe more than Rs one trillion to power producers. In states where consumers use their own electricity, especially commercial and industrial consumers who themselves have been using rooftop solar, states are limiting the development and use of renewables, including solar, so that the financial condition of discoms does not deteriorate further.

Many states have imposed limits on rooftop solar capacity as well as surcharges. Along with new constructions, electricity demand for domestic consumption is increasing. To meet this demand, policymakers in India have started providing incentives to increase the installed capacity of rooftop solar. If colder regions like America, Australia, Germany prioritize the use of solar power, India where there is plenty of sunlight, the use of solar energy There is also an opportunity to increase.

It is not that there is no demand for rooftop solar but the changing policy from time to time by the states hinders the attraction towards it. Power consumers are eager to install rooftop plants at homes or industrial units but they have to put up significant capital which banks are reluctant to provide, which provides an example of the state of our power sector. The installed capacity of solar energy is being increased at two levels, one by building ground solar systems and the other by rooftop solar installations. The solar energy generated by erecting structures on the ground is fed into the grid, while the solar energy generated by installing equipment on the roofs of residences and industrial units is mostly taken for self-consumption.

As part of reducing the use of polluting coal-based electricity, government institutions, residential buildings and industrial units are being encouraged to switch to solar power, but the pace of adoption is very slow. Various regulatory approvals and strict compliance standards in big cities are a major drawback of rooftop solar systems. Building rooftop solar capacity requires obtaining approvals from various local government bodies, which is a highly cumbersome process that also slows down the addition of rooftop solar installed capacity for household consumption. Compared to many countries of the world, India has abundant sunshine except during the monsoon season, this sunshine is not wasted and if its use in rooftop solar increases, it can play an important role in mitigating the country’s power crisis in the coming days.