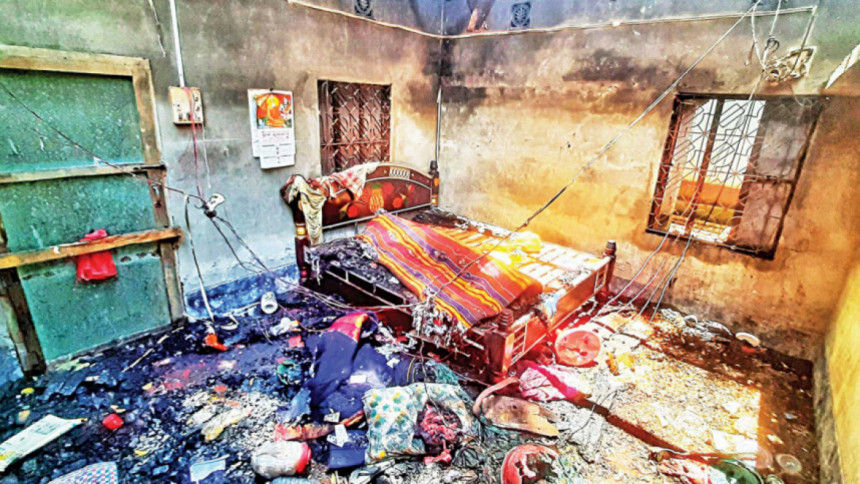 Extremists in Bangladesh vandalized a Hindu temple and set fire to minority homes and shops over a Facebook post. This incident of attack by extremists is from Sahapara village of Narail district. According to local media, after the mob attack on Friday evening, the police reached the spot and fired in the air to take control of the situation.

According to the Dhaka Tribune report, the mob targeted several Hindu shops, houses and temples. Angry people alleged that a youth has hurt the sentiments of Muslims by posting on social media. According to sources, the violence erupted over a social media post after Friday prayers. Muslims first staged protests against the Facebook post and then attacked minorities.

According to reports, a mob of Muslims entered the Sahapara temple and smashed the furniture there. Nearby shops were also ransacked. Police officer Haran Chandra Paul said that the crowd was dispersed by firing in the air. Narel SP Prabir Kumar Roy said that now the situation is under control. The incident is being investigated, action will be taken against whoever is responsible for the violence.

Police Inspector Haranchandra Paul said that when a young man named Akash Saha posted an objectionable post on Facebook, Muslims were enraged. The police tried to find Akash, but could not find him, picked up his father and took him to the police station. However, none of those who attacked the minorities were arrested. A police force has been deployed in the area to avoid further violence, The Daily Star newspaper reported.

A local resident Deepali Rani Saha was quoted by the newspaper as saying that a mob had entered her house and looted all the valuables. In a few moments another mob arrived, and finding nothing to loot, set fire to the house. A former woman member of the reserved seat in Dighalia Union Parishad said that after this attack, all the Hindus in the village have left their homes. Only a few houses have old people living and they too are scared. A police raid has been arranged in the village, but we cannot trust them. Attacks on Hindus by the Muslim majority have been on the rise in Bangladesh for some time either by spreading rumors or fake posts on social media.