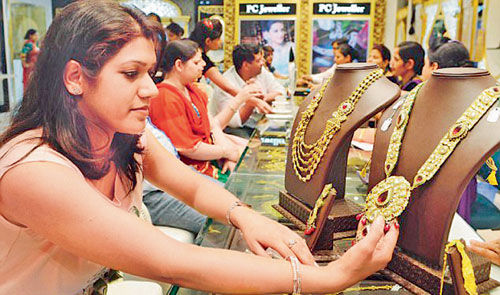 What happens when a country produces less of a good but consumes more? It will satisfy its need through imports, if the imported good becomes too expensive, the country has to pay more to import it. Such a situation is not desirable for any country, but unfortunately India is currently facing a similar situation, as the import of that item reached $63.6 billion in June 2022.

Russia’s attack on Ukraine led to a spike in prices of various commodities including crude oil, natural gas, coal, fertilizers, edible oils, pushing India’s trade deficit to historic highs and the rupee to historic lows, with the side effect of skyrocketing inflation.

Here we will talk, the yellow shining precious metal is gold. Indians’ love or fascination for gold is well known. Gold is the most imported commodity in the country after crude oil. According to the report of the World Gold Council, India’s gold import reached the peak of the decade in 2021. At present, as the value of the rupee against the dollar continues to depreciate and the foreign exchange is eroded and the trade deficit is widening, the unnecessary import of gold is becoming an undesirable thing. The ever-increasing import of gold in India has increased the pressure on the current account deficit.

In the financial year 2022, the trade deficit increased to 189.5 billion dollars, which was 102.2 billion dollars in the previous year. India’s current account deficit, which showed a surplus of 0.9 percent of GDP in fiscal 2021, went down to a deficit of 1.2 percent in the following year.

To curb these unwanted imports, the government increased the effective import duty on gold from 10.75 per cent to 15 per cent on July 1, with the main objective of supporting the rupee, which is continuously depreciating against the dollar, and keeping the trade deficit under control. Besides, tax was also imposed on the export of petrol-diesel. In the past, when the import duty of gold and silver was increased, its metal became stable.

Among the gold sold in India is the middle class – whose annual income is Rs. Between 2 to 10 lakhs, they have the highest share of 56%, which means that these people buy the most gold. IIM-Ahmedabad Status According to a nationwide survey conducted by the India Gold Policy Centre, the middle-income group has been the largest consumer of gold in India over the past five years. Per capita consumption of gold is highest among the rich but the total volume still depends on the middle-income group. Consumption has not been affected by monetization or implementation of Goods and Services Tax (GST).

Gold has traditionally been considered as the main source of investment in India. According to a preliminary estimate of the World Gold Council, about 24,000 to 25,000 tons of gold are lying in the homes of Indians, of course, this estimate is for the month of May 2019. In the subsequent three years, about 1500 to 1800 tonnes of gold have been imported.

Now the question here is that, can Indians stop buying gold for a year? It is really difficult to answer. Indians cannot stop buying gold but can reduce demand. After China, India is the second largest importer of gold in the world. A reduction in gold imports will save forex reserves going abroad, support the value of the rupee against the dollar, and prevent widening of the trade deficit and current account deficit. Also, the capital that is going to be idle in gold will be actively used.

India is completely dependent on imports for gold. Amidst the corona epidemic, fear of instability and recession, India has imported a total of 924.6 tonnes of gold during the calendar year 2021, behind which half… Rs. 4.28 lakh crore has been spent, which shows a 165 percent increase in imports compared to 349.5 tonnes in 2020. Huge expenditure on gold imports is also one of the reasons behind the decline in foreign exchange. Out of the total gold purchased during the year 2021, Rs. 610.9 tonnes of gold jewelery worth Rs 261,140 crore was purchased, showing a growth of 96 per cent in value terms. However, investment-oriented demand for gold increased by only 45 per cent to 186.5 tonnes valued at Rs. 79,720 crores.

In the current calendar year 2022, gold demand is expected to be 800 to 850 tonnes, which will be the highest in the last 10 years. In the country, the January-March 2022 quarter fell by 18 percent to 135.5 tonnes, due to a 26 percent drop in demand for gold jewellery. Apart from jewelry, gold is also bought as a source of investment in India.