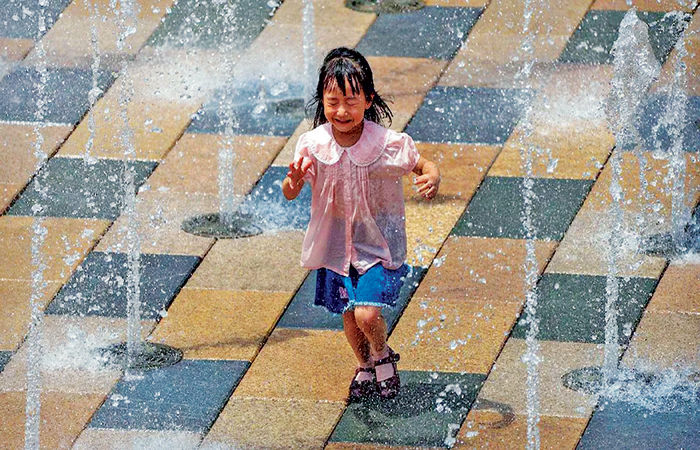 – Red alert in 86 cities in China, including Shanghai

– Between the heatwave, 1,800 hectares of forest were destroyed in two wildfires in Portugal, Spain and several parts of southern France.

– Temperature likely to reach 40 degrees in Shanghai, 43 degrees in central Spain and 35 degrees in England

BEIJING: Heatstroke is currently sweeping the world in China and several countries in Western Europe. Red heat alerts have been issued in nine cities, including Shanghai, the commercial capital of China. Rising temperatures have put Britain in a position to declare a national heatwave emergency.

Due to the heatwave, construction work has been halted in all six cities, including Shanghai. With a population of 2.50 crore, the Shanghai Cooperation Organization (SCO) has asked people to be prepared to endure the scorching heat for the next week. For the first time in five years, a red alert has been issued for heat in Shanghai. In Shanghai, there have been only 15 such days since 19, when the temperature has crossed 40 degrees Celsius. In Shanghai Wildlife Park, 3 tons of ice is being used every day to keep lions, pandas and other animals cool.

China usually gets heavy rains right now, but this time the heat time has lengthened. More heat is expected in many areas in mid-July due to climate change. A road in Jiangxi province has risen by 3 inches due to high temperatures.

Meanwhile, an amber heat warning has been issued in Western Europe due to the heatwave. The meteorological department has forecast a temperature of 40 degrees Celsius in the coming days. Predicted to reach. Britain’s health protection agency has warned of a “fourth level” national emergency.

The heatwave, meanwhile, has sparked wildfires in many parts of Portugal, Spain and southern France. Experts say the situation is due to climate change.

The blaze in Portugal displaced more than 200 people, while more than 1,500 firefighters were called in to put out the blaze. The heatwave also caused fires in Spain and France, as well as in Turkey. Two wildfires in the southern French province of Bordeaux have destroyed 1,200 hectares of forest and displaced 4,500 people.