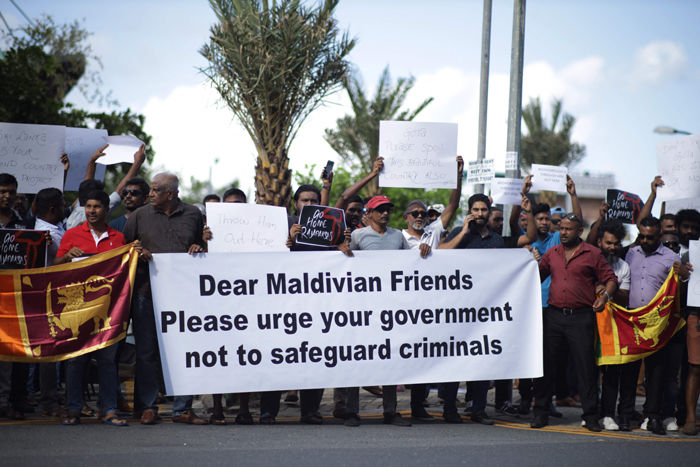 Amid the ongoing political and economic crisis in Sri Lanka, President Gotabaya Rajapakse took refuge in the Maldives early on Wednesday. However, this angered people in the Maldives and they staged anti-government protests. Hence, the government, which has come on the backfoot, announced to explain the issue in the Parliament.

Sri Lankan citizens protested in the capital Malé against the government’s decision to grant Gotabaya asylum in the Maldives. He demanded the government to stop providing security to ‘criminals and thieves’. After that the local people of Maldives also came forward in their support and demanded that they be allowed to protest peacefully. As the controversy escalated, the Ministry of External Affairs refused to comment on the issue of granting asylum to Gotabaya. However, the ruling National Party of the Maldives said the government would explain in Parliament.

According to sources, before Gotabaya reached Maldives with 13 people, the Maldives authorities did not allow his plane to land. However, Gotabaya’s plane was allowed to land at the airport after Parliament Speaker and former President Mohammad Nasheed called and took him to an undisclosed location. In this regard, the Government of Maldives argued that Gotabaya is still the President of Sri Lanka. So if they want to come to Maldives, they cannot be stopped. On the other hand, according to some media reports, Gotabaya left on Singapore Airlines on Wednesday evening as the Singapore government accepted Gotabaya’s request for asylum.