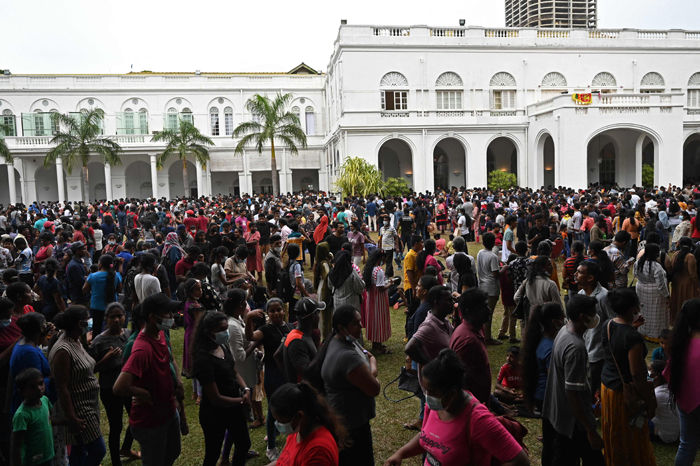 For the first time since independence, President Gotabhaya Rajapaksa and his family are facing strong opposition in Sri Lanka. Now at the airport, immigration officials and people stopped President Gotbaya and his brother Basil Rajapaksa from fleeing the country for fear of arrest. Sources said Gotbaya, who had offered to resign on Wednesday after protesters stormed the presidential residence on Saturday, has now returned.

President Gotabaya Rajapaksa, who has been infamous across the country for pushing Sri Lanka into economic ruin, could not go to Dubai after being stopped by airport immigration staff. The staff did not let them go beyond the safety check. As president, Gotabaya has been granted immunity from arrest. So he is likely to be arrested after resigning. As a result, they fled the country.

But immigration staff refused to go to the VIP suite to stamp a coin on his passport. So he had to leave four flights to Dubai and spend the night with his wife at a military base beyond the airport. Gotabaya said he could not leave the country as an ordinary citizen from another airport due to strong opposition from the people.

Like Gotbaya Rajapaksa, his brother Basil Rajapaksa arrived at Colombo International Airport to flee the country. Basil Rajapaksa had recently resigned as finance minister. Basil wanted to get out of Sri Lanka using the Silk Route. However, the Airport Union chanted heavy slogans against Basil Rajapaksa. Eventually he had to return due to public protests.

Meanwhile, amid economic and political crisis, protesters have taken over the Rashtrapati Bhavan and the Prime Minister’s residence. He has warned to vacate the residence only after Gotabaya Rajapaksa resigns from the presidency. Gotabaya announced on Saturday that he would resign on Wednesday following protests by protesters.

Now, however, sources say he has taken a U-turn and set conditions for his resignation. He has indicated that he will not resign until he and his family are allowed to leave Sri Lanka safely. The issue has been discussed with the opposition, but no one is willing to believe them. The situation could get worse if Gotabaya does not resign on Wednesday. Prime Minister Ranil Wickremesinghe resigned on Saturday.

The United States, meanwhile, has denied a visa to China’s ally Gotabaya Rajapaksa. Gotabaya had dual Sri Lankan and US citizenship, but relinquished his US citizenship before the 2014 presidential election. Now Gotabaya tried to go to America, but the Biden administration refused him a visa. However, he did not give a reason on the issue.