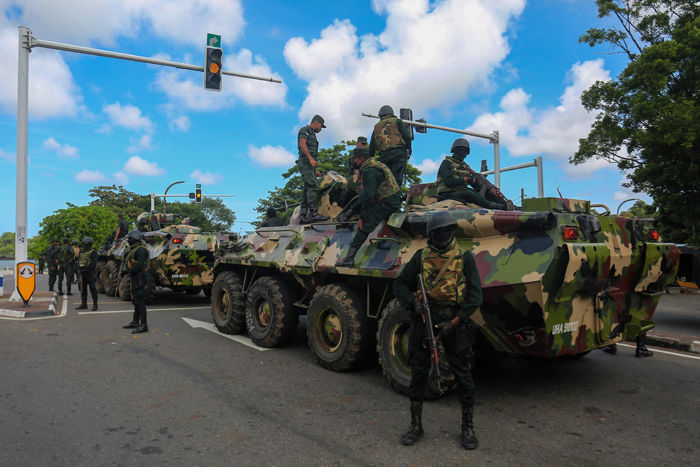 As Sri Lanka faces a dire economic and political crisis, President Gotabaya Rajapaksa, who fled the country after fearing arrest, finally arrived in Singapore on Thursday and tendered his resignation via e-mail. Parliament Speaker Mahinda Yapa Abeywardane has confirmed receipt of Rajapaksa’s e-mail. However, the official announcement of the resignation will be made on Friday. Along with this, the protesters celebrated this news by bursting firecrackers. Meanwhile, the army has deployed tanks on the road to quell the anti-government protests.

Sri Lanka’s fugitive former president Gotabaya Rajapakse arrived in Singapore on a Saudi flight on Thursday. Upon his arrival, Singapore’s Ministry of Foreign Affairs described his arrival as a personal visit. He also clarified that Gotabaya did not seek asylum before him and he was not given any asylum. Gotabaya fled the country on Wednesday to the Maldives and was on his way to Singapore, fearing arrest for being held responsible for Sri Lanka’s economic crisis.

Indunil Abeywardene, Media Secretary to the Speaker of the Parliament, said that the resignation letter of President Gotabaya Rajapakse has been received through the Sri Lankan High-Commission in Singapore. However, Parliament Speaker will announce Gotabaya’s resignation on Friday after completing due process and legal formalities.

As soon as Gotabaya’s resignation was reported, protesters in Sri Lanka celebrated by bursting firecrackers. Along with this, the protesters have asked to end their ‘occupation’ from all official buildings including Rashtrapati Bhavan, President’s Secretariat and PM’s office. The protesters had vacated the Rashtrapati Bhawan by Thursday afternoon and it is now fully occupied by the military. Protesters had occupied the presidential residence since Saturday and occupied other government buildings, including the PM’s office, after Gotabaya fled the country.

Ranil Wickramasinghe, who had earlier been made Acting President by Gotabaya before fleeing Sri Lanka, had directed the military and police to firmly quell the anti-government protests. He imposed a curfew in the country on Wednesday night, which was extended on Thursday. With the resignation of Rajapaksa, now Acting President Wickramasinghe will become the President. He asked the Speaker to convene an all-party meeting on Wednesday itself and appoint a new Prime Minister unanimously. Following Wickramasinghe’s directives, the army rolled out tanks on Thursday and warned protesters to vacate government buildings and obey curfew orders.