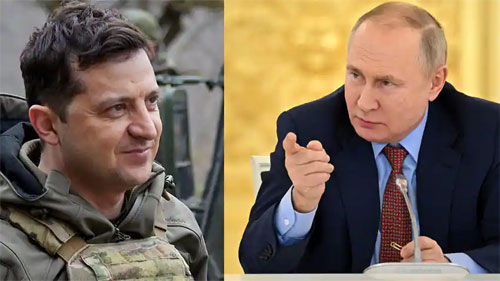 International Monetary Fund (IMF) E.S. The world’s economic growth rate of 3.6 percent has been reduced to an expected 3.2 percent in 2022. This is the retreat of the meaning of the world. In the year 2021, the world economic growth rate was 6.1 percent, which shows that Russia has done much more damage to the world economy than just Ukraine. Through this war, Russia has imposed an extraordinary increase in the prices of food and fuel on the people of the world. If Russia is defeated in this war, it should be forced to pay for the enormous damage it has done to the world economy. Russia is responsible for reducing the rate of economic growth in many countries of the world. E.g. According to the IMF estimate, E.S. In 2022, the economic growth rate of America is only 2.3 percent, European Union 2.6 percent, China 3.3 percent, Russia itself negative 6 percent and India positive 7.4 percent. Asian Development Bank of India The economic growth rate of 2022-2023 is estimated to be reduced from 7.5 percent to 7.2 percent. The Reserve Bank of India has kept its estimated growth rate for India at 7.2 percent, the same as the Asia Development estimate. In all this, the gratifying thing for India is that India is growing its economy faster than the economic growth rate of all the rich countries of the world. Surviving with determination even in adverse situations is called ‘resilience’ in English. Which is showing India now. E.g. India has a foreign exchange of about 580 billion dollars which is enough for one year of India’s imports. Of course, for this, India’s imports of more than 600 billion dollars have to be marginally cut. Or exports have to be increased. Overall, India’s foreign exchange does not show an alarming situation. Similarly, India’s agriculture sector is very strong and it is reasonable to expect good agricultural production this year due to good rains. India has also taken effective measures to curb price hikes and India’s manufacturing sector is also showing strong growth rates and India has a favorable climate for foreign investment. Although India’s economy is not as export-driven as China’s, India exports as much as 18 percent of its total GDP. Compared to India’s economic growth rate of 7.2 percent or more in 2022, according to the IMF’s estimate, America’s growth rate is expected to be 2.2 percent in 2022 and only 1 percent in 2023.

The Indian Rupee, which touched around Rs 80 a few days ago, has now gradually recovered to Rs 79.27 to the dollar and is expected to touch Rs 78.50 to the dollar by the end of August. Of course, if the prices of crude oil continue to increase and increase, the price of one dollar can reach 81 rupees. Depreciation of rupee is called devaluation, which is done by the government of the country, on the other hand, when the rupee gradually depreciates against the dollar, it is called depreciation in English. There is a difference between devaluation and depression. Devaluation and its scale is decided by the government. While depreciation determines the supply and demand factors in the market. Even now, during the financial crisis, America laughs because the American dollar is the international currency and the Euro has not replaced it. If India wants to come out of the current global financial crisis, India will have to reduce its fiscal deficit.