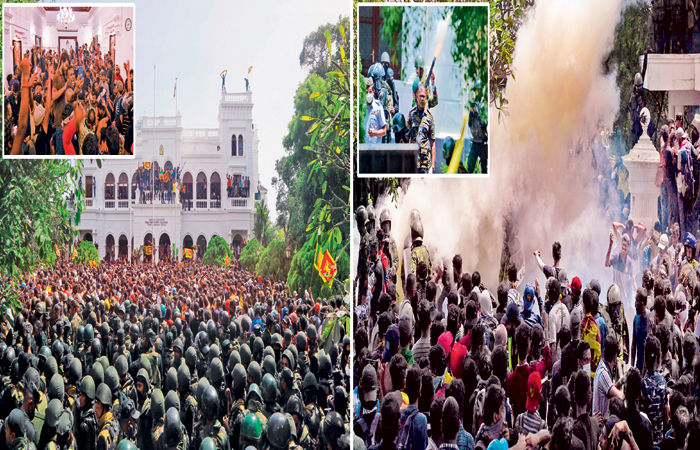 – Gotabaya may have gone to Singapore from Maldives with family: India denies involvement in ousting President

Colombo: Sri Lanka is currently facing a political crisis with a terrible economic crisis. Protests erupted across the country as President Gotabaya Rajapaksa quietly fled the country early Wednesday morning for fear of arrest. Demonstrators occupying the presidential residence for the past four days turned violent as demonstrators occupied the prime minister’s office. Vikram Singh, on the other hand, has declared a state of emergency as acting president and has given free rein to the army-police to quell the protests. Gotabaya Rajapaksa, who finally fled the Maldives, resigned from the presidency late Wednesday evening.

However, fearing arrest for pushing the country into economic ruin, Gotabaya fled the country early Wednesday morning with 12 people and arrived in the Maldives on a government plane. Gotabaya’s brother Basil Rajapaksa also fled the country with his family, sources said. There were rumors in Sri Lanka that India had a hand in ousting Gotabaya, but the Indian embassy dismissed the reports as baseless.

Protesters were furious when news of Gotabaya’s escape spread. He also occupied the Prime Minister’s Office and marched towards Parliament. He said protests would continue until Gotabaya resigns. The protesters also demanded the resignation of Ranil Wickremesinghe.

Gotabaya, on the other hand, appointed Ranil Wickremesinghe as acting president before leaving the country, said Parliament Speaker Mahinda Yapa Abeyavardane. He said the polls for the new president would be held on July 20. As soon as Vikramasinghe came to power, he declared a state of emergency in the country and imposed a curfew in the western province, leaving the army and police open to quell anti-government protests. Police fired teargas shells and water cannons to disperse the angry crowd.

The protesters also reportedly occupied the government television channel Rupavahini along with the PM’s office. The channel was temporarily suspended. Along with this, another government channel also went off-air. The protesters, however, dismissed reports of the channel being occupied. “We reached the channel’s office and requested the authorities to present our case,” he said. So we were allotted a 15 minute slot.

Meanwhile, in a speech, Vikramasinghe ordered the Sri Lankan army and police to take all possible steps to enforce law and order in the country. They are given free rein. As protesters stormed the prime minister’s office, Wickremesinghe said fascists could not be allowed to seize power. The Speaker of Parliament, on the other hand, called an emergency meeting of all parties.

Earlier, the Sri Lankan Air Force said in a statement that Gotabaya had fled the country in a military jet with his wife and two security officials. The aircraft was allotted to him only after the approval of the Ministry of Defense. Yesterday Gotabaya tried to leave the country on a civilian plane, which failed and he fled in a military jet. In the wake of the incident, the army stepped up security for Air Force, Navy and Army personnel. Gotabaya fled to the Maldives with 12 people early in the morning and left for Singapore in the evening, sources said. 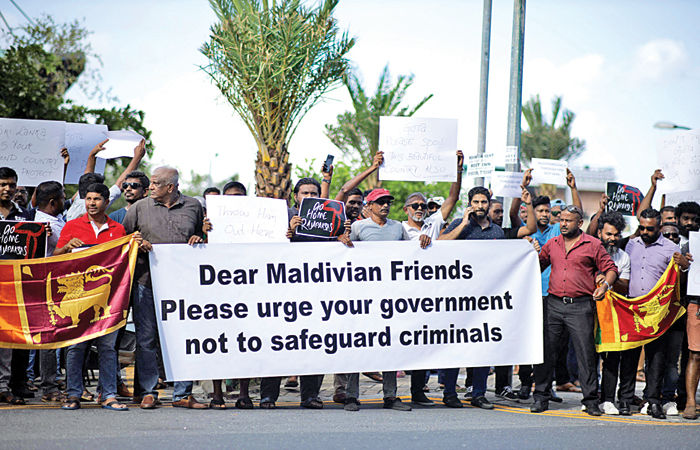 Demonstrations in the Maldives, the government in the backfoot: will make a statement in Parliament

– Gotabaya cannot be stopped from being president at the time of his arrival in the country: Maldives government

Amid the ongoing political and economic crisis in Sri Lanka, President Gotabaya Rajapaksa took refuge in the Maldives early Wednesday morning. However, this angered the people in the Maldives and they staged anti-government demonstrations. The government, which has been in the backfoot, has announced a statement on the issue in Parliament.

Sri Lankan citizens protested in the capital, Male, against the government’s decision to grant Gotabaya asylum in the Maldives. He demanded that the government stop providing protection to ‘criminals and thieves’. Locals in the Maldives then came out in support of him and demanded that he be allowed to demonstrate peacefully. As the controversy escalated, the foreign ministry declined to comment on the issue of granting asylum to Gotabaya. However, the ruling National Party of the Maldives said the government would make a disclosure in parliament.

According to sources, before Gotabaya arrived in the Maldives with 12 people, the Maldivian authorities did not allow his plane to land. However, Gotabaya’s plane was allowed to land at the airport after being called by the speaker of parliament and former president Mohammad Nasheed, and from there he was taken to an unknown location. In this context the Maldivian government argued that Gotabaya is still the President of Sri Lanka. So they can’t be stopped if they want to come to Maldives. Gotabaya, on the other hand, left for Singapore Airlines on Wednesday evening after the Singapore government accepted his request for asylum, according to some media reports.