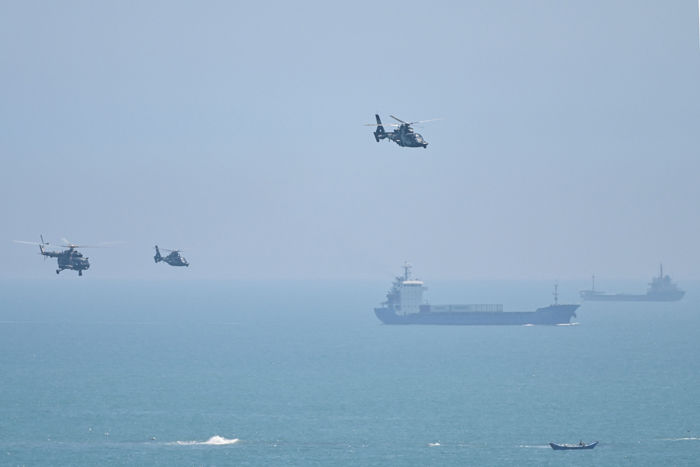 China, angered by US House Speaker Nancy Pelosi’s visit to Taiwan, imposed a blockade on Taiwan upon her return and on Thursday fired a missile across Taiwan’s border for the first time in 26 years as part of a four-day live-fire drill. On the other hand, Taiwan has also activated the Patriot missile defense system bought from America to respond to China. Along with this, Taiwan has canceled all its flights due to the Chinese attack. As a result, the tension between the two countries has reached an extreme. In addition, the US has also sent its warship USS Ronald Reagan, stationed in the Philippine Sea, to assist Taiwan while monitoring the entire situation.

China has begun military exercises in six zones around Taiwan on Thursday, with the departure of US House Speaker Nancy Pelosi from Taiwan. China began the exercise with live fire drills using long-range rocket artillery and conventional missiles in pre-determined areas in the eastern part of the Taiwan Strait. China has deployed several warships, fighter jets, missiles for this exercise. China is conducting military exercises just 9 nautical miles from Taiwan’s border.

After China started the exercise at 12:00 p.m., the PLA told the Eastern Theater Command that the military conducted a live fire drill with long-range artillery at about 1:00 p.m. in the middle of the Taiwan Strait. Many of those missiles hit specific targets with perfect accuracy. China also went viral with several video clips of the attack. Many posts claim that China is 125 km from Taiwan. The missiles were launched from Pingtan in Fujian province of far eastern China. According to Chinese media claims, the Chinese military fired several missiles and rocket artillery systems, including the DF-21, DF-26 and hypersonic DF-17.

China fired 11 missiles towards Taiwan as part of its military exercises. The Taiwanese government also confirmed it. However, some of these missiles are reported to have landed in Japan. Japan’s Defense Minister said that five missiles fired from China have landed in Japan’s territory. This is a serious matter, as it is directly related to the security of our country. We will not compromise with the security of our people.

China launched the drill after threatening to pay a heavy price to Taiwan for Nancy Pelosi’s visit. China considers Taiwan as its own part while Taiwan considers itself an independent country. Nancy Pelosi’s visit has fueled the fire as China prepares to bring Taiwan under its control through long-needed coercion.

On the other hand, Taiwan’s Ministry of Defense said that the Chinese military launched several ballistic missiles on Thursday in the north-east and south-west of our country. Taiwan’s military is monitoring the situation. And the air defense system has been activated. Taiwan said we are ready to face any situation, but we do not want conflict. The US has also warned China that China will not turn Nancy Pelosi’s visit into a crisis.

In response to China’s missile launch, Taiwan has also activated the Patriot missile defense system purchased from America. The Patriot missile defense system is operated by the US and its allies. This is a combat proof weapon. Patriot is a long-range, all-altitude, all-weather air defense system to counter strategic ballistic missiles, cruise missiles and advanced aircraft. Along with activating its defense system, Taiwan has canceled all its airline flights. However, it is not yet clear how much of an impact China’s live drill has had on shipments of processor chips and other goods needed by global industries.

China has ordered commercial ships and planes to stay away from military drills that have begun encircling Taiwan on six sides. A Hong Kong newspaper quoted the South China Morning Post as describing the drill by the Chinese military as an effective blockade of Taiwan. About 40 flights departing and coming from Taiwan have been canceled due to China’s drill. The two sides, which split after a civil war in 1949, have no official ties, but have the world’s busiest technology and manufacturing ties.