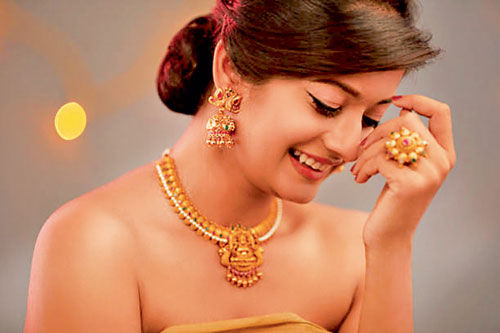 – Behind the world market, even at home, the jewelry market recovered after the recession and saw a boom again.

Gold was quoting at $1,682 per ounce after the week saw a fall of $35/$38 per ounce in the global market. Gold prices fell by $35/30 per ounce despite dollar weakness over the last three days due to continued gold selling, and a bearish trend has been seen in gold. However, at the end of the week, the price rose again to 1730 dollars. Last week’s gold price forecast stated that gold may fall from $1,700 per ounce to $1,680 per ounce. In the last 3 days, the dollar index fell from 109 to 106. It is known among traders that gold prices rise when the dollar becomes soft, but this week, the above adage has been proved wrong, and the weakness of the dollar has ignored the strength of gold. The Fed attempts to control inflation by raising interest rates to fight inflation. On the other hand, increasing the return of treasury bills, investors have started investing in treasury bills instead of gold. Which indirectly supports gold’s decline.

Despite the ongoing threat of Covid in China, with gold falling below $1700 per ounce, Chinese investors are entering the market to buy gold. The Chinese are buying double the amount of gold bars as gold prices are down by 17 percent, but the volume of gold sales is down by 20 percent.

According to a CCTV report, Chinese gold store officials say that they have changed gold prices 7-7 times due to falling global gold prices, which has attracted people to buy gold.

It should be noted that at the time of the war against Russia, Ukraine sold 12 billion dollars of gold to raise cash to buy other essentials. Deputy Governor of the National Bank of Ukraine, Kateryna Roskop, said that they have sold $12 billion worth of gold since the Russian invasion. The report of the World Gold Council states that Ukraine has sold 7 times the amount of gold reserves.

There are 3000 tons of gold in the mines of Ukraine, but due to the shortage of gold mining in Ukraine, they cannot produce gold at full capacity. Gold prices bear heavy selling pressure despite dollar weakness, falling oil prices, stock market rally, interest rate hike signal by Fed, and efforts to control inflation, plus 3 percent return in Treasury bills etc. put the brakes on gold price rally and gold to soften. pushes. Overall, gold does not see immediate bullish waves.

Looking at the silver chart for the last six months, it seems that silver prices have been falling and there are no reasons why silver prices have gone up. Looking at the 3-year silver chart, it is said that the bullishness in long-term silver trades has been falsified and the bullishness in long-term trades has come to a halt.

Silver has oversold this month in response to silver prices and the 200-day average of silver prices may be trending higher, but silver may still be slightly bearish as European Central Banks change their behavior. The 3-year chart shows a steady decline in long-term bullish trades. In the longer term, silver still looks a little bearish.

There has been a decline in the income of old silver. Silver demand and long and short trading volumes on New York’s Comex market are falling. Silver prices will remain volatile and silver will set a favorable direction of 1800 to 1875 cents.

Domestic gold prices have decreased by Rs.500 per ten grams. A bearish trend is seen in gold due to the softness of the global market.

The showroom is not yet sold out. Households are negligible. Then the shopkeepers buy enough gold to maintain the stock against the sale of jewellery.

The income of old gold jewelery has decreased and the consumers are not coming to sell gold jewelery due to fall in price and the income of jewelery has decreased. Traders who buy old jewelry give gold money to consumers by deducting 2 tonnes of old jewelery from the purity of the old jewelery which is checked by rubbing the old jewelery on the test, because traders cannot explain the argument of gold price fluctuation to consumers. Averaging the prices by showing the least amount. At that time, the importers make a short-term profit by fixing the global prices and the dollar-rupee exchange rate, instead of importing gold and selling forward gold, they make short-term profits by trading with futures.