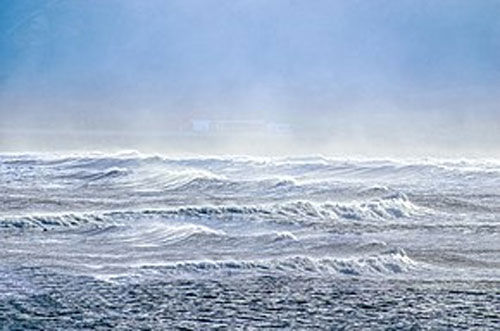 – These microbes can provide clues to the environment of that region and shed light on how life on Earth originated.

Rata Samudra is called the saltiest sea in the world. In this deep sea, scientists have found rare salty craters in the deep sea. There is so much salinity that no life like fish can survive in it. But even among such normal salinity, there are some species of micro-organisms (Microbes) that can live even among such abnormal salinity. The swelling may persist.

By doing more research on this, the scientists have found that this research will shed light on the origin of life on earth. These craters are located at a depth of about 5800 feet from the sea level.

Regarding these saline craters (pits), it has been stated in the journal Communication Earth and Environment that scientists discovered these craters after working for six weeks with a submersible remote operated vehicle (ROV). The researchers named these salty craters NEOM. These holes are in places where no one has been before. Water and bottom samples and a core core (CORE) were collected to understand the sedimentology chemistry and biology of the craters. That sample will reveal whether the NEOM pool (Neom-Garta) falls within the category of other garthas found within the night sea. Or are they of a different category? There are two sections of this range, one is near the coast, the other is about 25 km from the coast. This is near NEOM Arabia. Hence the history of tsunamis, tidal surges and earthquakes in the Gulf-of-Aqaba can be traced.

Researchers say that these microbes survive even in dangerous situations such as death. Scientists believe that life must have originated in the deep, dark and oxygen-free corners of our oceans.

Along with this new research, early life ancient environmental conditions are also being studied.

Professor Sam Purkis, chair of the University of Miami’s (Miami) Department of Marine Geology and author of the discovery, says that deep-sea-brine-pools are rich in aestrimophile bacteria despite their oxygen-deficient and hypersaline conditions. From this we can know how life started on earth. Not only that, but other planets in our solar system where there is water will also know something about the origin of life.

At this stage, if you want to know the life force of this microscopic organism, it is only from the above example, but it should be remembered that an ethnic reactor exploded during April 25-26, 1986 at a place called Chernobyl in the then intact Soviet Union, which is now Ukraine. Fifteen days later, the scientists went to the reactor wearing radiation protective suits. Upon investigation, to their surprise, they found germs clinging to the downward (inward) curved edge of the reactor. This is the limit of life-force.