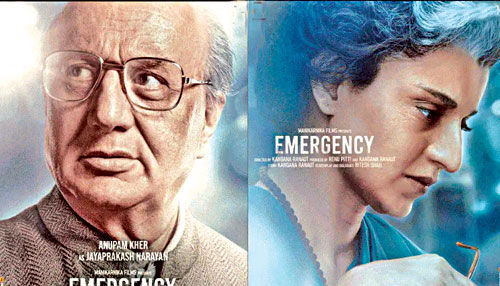 – After Kangana as Indira Gandhi, Anumap Kher’s look as JP is also discussed

Anupam Kher has been selected for the role of Jaiprakash Narayan in Kangana Ranaut’s film Emergency, which narrates the events surrounding the emergency imposed on the country during the reign of Indira Gandhi.

Veteran actor Anupam Kher’s Jayaprakash Narayan’s look became the talk of the town as soon as it was released.

Balakat actress Manati Kangana is playing the role of Indira Gandhi in this film. Her look as Indira has also become a topic of much discussion.

Indira Gandhi imposed emergency in the country in 1975. At that time, all the opposition parties under the leadership of JP gathered to oppose this crisis.

Announcing Anupam Kher’s look, Kangana said that in reality the hero in this film is Anupam Kher. It is a matter of happiness that we have got a talented actor like him to play the character of Jaiprakash Narayan.

It is worth mentioning that Kangana herself is the producer and director of this film.