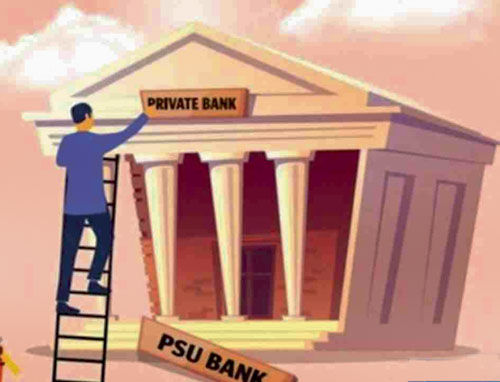 – If most of the banks are privatized, the biggest relief will be to the Reserve Bank

A policy paper prepared by two economists of the country has suggested privatization of all state-owned banks in the country except the State Bank of India (SBI). In a paper jointly prepared by Prime Minister’s Economic Advisory Council member Punam Gupta and former NITI Aayog vice-chairman Arvind Pangria, they said, “In principle we are in favor of privatization of every state-owned bank, including SBI.” But considering India’s economic structure and political system, there would be no government that no bank would want to own. Keeping this fact in mind, every government-owned bank except SBI should be privatized.” Among the government-owned banks, SBI’s performance has been the best. If the situation is favorable in future, SBI can also be privatized.

If most of the banks are privatized, the biggest relief will be to the Reserve Bank. Because in case of privatisation, it will reduce the liability to intervene. Economists’ recommendation is welcome, but it is not the first time such a recommendation has been made. Earlier also recommendations have been made by several levels and committees for the privatization of banks in the country. However, it can be understood from the recent decisions that the government has preferred to merge banks rather than privatize them. As the government is well aware that it is not easy to proceed with privatization, the government has undertaken an exercise to improve the management and financial health of those banks. The government had announced the privatization of the two banks a long time ago, but could not go ahead with the legislative changes.

As it has a majority in the Lok Sabha, it may not be politically challenging for the current government to proceed with the privatization of banks, but it is certain that the government will face opposition to the privatization from the employees of the public sector banks. Before going ahead with privatization amid employee protests, the government has to exercise to build and maintain the financial health of banks. The Reserve Bank has indeed been successful in bringing down the non-performing assets (NPAs) ratio in public sector banks which had gone up in recent years.

The NPA ratio of Indian banks stood at a six-year low of 5.90 percent at year-end March 2022, but India’s banks are still higher than their peers, a report said recently. All major economies, except Russia, have lower bad loans than India. . Gross NPA of Russia is 8.30 percent. The report mentioned that bad loans in India are expected to decrease in the current financial year due to high credit growth. In 2016, when the Reserve Bank of India conducted the Asset Quality Review, the proportion of bad loans in the Indian banking system increased.

At the end of March 2018, the proportion of bad loans in the country was more than 10 percent. However, it has been decreasing since then. A low ratio of NPAs can become a strict criterion for privatization of banks. Because no merchant is quick to take over a debt burdened business.

In a report prepared by two economists of the country, the government has drawn attention to the weaknesses in the performance of public sector banks and the position of private banks against them. However, the finance ministry is claiming that the performance of government banks has improved in recent years. If the government wants to maintain its presence in the banking sector, the reason behind undertaking the privatization exercise is not understandable.

Our public sector banks are run by public tax money and it is not as if bank managers themselves are not capable of running banks. India is the only country in the world where the government itself runs a bank, but there is no business approach in its management. For our politicians to stay in power, state-owned banks are a scapegoat which they use at their own convenience and when the banks fail, they take measures to fix them with public money. It would not be wrong to say that perhaps no government wants to lose its dominance over the banks just because they are becoming a cash cow.