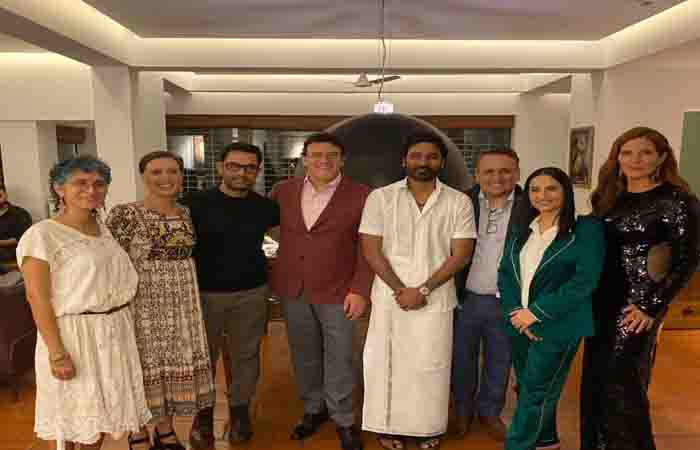 – Hollywood directors Russo Brothers are currently in India for the promotion of their film ‘The Gray Man’.

Hollywood directors Russo Brothers are currently in India for the promotion of their film ‘The Gray Man’. The film is scheduled to release on July 22 on NetFlix. It will feature South superstar Dhanush, Ryan Gosling and Chris Evans in lead roles. Russo Brothers hosted the film’s grand premiere last night, which was attended by B-town stars. Aamir Khan was busy promoting his upcoming film ‘Lal Singh Chadha’. As Aamir Khan could not be a part of the premiere due to his busy schedule, he organized a lavish dinner party for the Russo Brothers.

Aamir Khan was invited to the premiere of ‘The Gray Man’ but could not attend so he invited the team of ‘The Gray Man’ for dinner at his home. It was attended by Russo Brothers, Dhanush and everyone associated with the film. Aamir’s dinner party was also attended by his ex-wife Kiran Rao. Aamir made everyone a Gujarati dinner, for which he called the best chef.

Aamir Khan himself is very fond of Gujarati food. In this way, he called a Gujarati chef to prepare a tasty dinner. Aamir Khan invited chefs from different places for a dinner party. The pictures of this dinner party are going viral on social media.

Aamir Khan will soon be seen in his next film ‘Lal Singh Chadda’. After the release of the film’s trailer and songs, the audience is eagerly waiting for the film. Kareena Kapoor Khan will be seen in the lead role along with Aamir Khan in this film. The film is slated to release on August 11. The film is a Hindi remake of the 1994 film ‘Forrest Gump’.