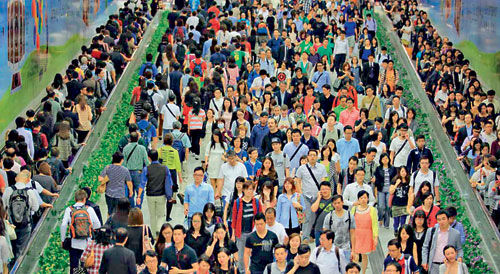 – India’s population projections continue to be taken seriously by policymakers

Recently, more than fifty percent of the crew members of a major airline company of the country went on leave together. The reason behind this was that these employees were being recruited by several other airline companies on that day. Thus it was observed that the operations of the respective airlines were disrupted with a large number of employees being absent at the same time. The aviation sector, a major component of the service industry, is experiencing a worldwide shortage of trained personnel, and this increases the demand for experienced and trained personnel in the field in case of new company arrivals. During the period of Corona, there was a massive layoff of employees from airline companies around the world, which came under great pressure due to the halting of mobility, due to which there is also a shortage of employees in the aviation sector.

Indian companies especially service sector companies are facing shortage of trained workforce. While the contribution of the service sector to the Gross Domestic Products (GDP) of the country has been more than fifty percent, if the development of this sector is stunted due to the lack of trained employees, it will be considered a misfortune for the country’s economy. There is no doubt that the unemployment rate in the country is high but the availability of employees in terms of employment is low, it would not be wrong to say. In the September quarter of the current year, out of 11 sectors, companies in the IT and technology sector have shown the highest intention to hire employees. However, at the same time, these companies have also expressed their opinion in a survey that it has become difficult to get employees with the right skills. In such a situation, companies are forced to spend heavily on skilling and re-skilling of employees.

A recent report by the Population Division of the United Nations Department of Economic and Social Affairs has predicted that India will become the world’s largest economy by population in 2023. India’s population will continue to grow while China’s population will decline unless there is a fundamental change in fertility rates in both countries. Currently, the population of China and India is slightly above 1.40 billion. By 2050, India’s population is estimated to be 1.70 billion while China’s is 1.30 billion. Generally the more population of any country that is considered to be an advantageous position for that country. But this position can be strong for a country only when the employment situation in that country is favorable. Talking about India, the school education system in the country is not as efficient as developed countries. Not only the attendance of students at the school level has not reached the expected level, the quality of higher education is also not seen as per the current employment requirement. Basic training is not provided to students at secondary or higher secondary school education level.

In a recent study conducted in Delhi, the capital of the country, it was found that more than 33 percent of high school students in urban areas do not have basic knowledge of mathematics and language. The knowledge of many of these people was found to be limited to what should be a primary school student level. Such kind of education cannot supply the right workforce in the job market. If the current education system is not radically changed, our record population will soon become liabilities instead of assets for the country.

Automation and artificial intelligence have replaced traditional employment today and technological change in the country post-Corona has created a massive need for a skilled workforce. Lack of proper training in the country’s existing workforce is preventing their talent from emerging. In view of the Make in India program launched by the Government of India, the need for trained personnel is also increasing so much that it has become necessary to find other sources for the necessary funds to provide skilling.

In the post-coronavirus era and the ongoing Russia-Ukraine war, India has provided an estimate of how much of a challenge it can pose to many countries of the world, including India, to rely on others to meet their needs. Prime Minister Narendra Modi has talked about a self-reliant India and given the mantra of vocal to local. The purpose behind giving this slogan is that the industries of the country should produce the essential goods at home and the consumers should consume indigenous goods and also promote them abroad. But for India which is dependent on imports for many goods and services, the exercise of turning vocal to local will not be easy because to be self-sufficient we need to have many aspects, one of which is skilled workforce. India is lagging behind on many fronts today due to lack of skilled workforce. Especially in the technology sector.

65 percent of India’s population is below 35 years of age. With a huge amount of youth, India can fulfill the slogan of vocal to local if these youth are properly trained or bring out the skills they have.